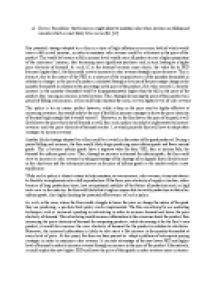 Discuss the policies that businesses might adopt to maintain sales when incomes are falling and consider which is most likely to be successful. [12]

Transfer-Encoding: chunked ﻿1. Discuss the policies that businesses might adopt to maintain sales when incomes are falling and consider which is most likely to be successful. [12] One potential strategy adopted by a firm in a time of high inflation or recession, both of which would cause a fall in real incomes, in order to maintain sales revenue could be a decrease in the price of the product. This would be because a fall in income levels would cause all product to cost a higher proportion of the consumers? incomes, thus becoming more significant purchases and, in turn, leading to a higher price elasticity of demand. As such, if, as the demand becomes more elastic, the value for its PED becomes higher than 1, the firm could serve to increase its sales revenue through a price decreases. This is because, due to the nature of the PED as a measure of the responsiveness of the quantity demanded in relation to changes in the price of a product, calculated through a division of ...read more.

advantage of the shortage of such goods that is likely to arise in the short term and the subsequent increase in the price of inferior goods as the market reaches a new equilibrium. While such a policy is almost certain to help maintain, or even increase, sales revenue, it may not always be feasible to implement such a shift in production. If the firms price elasticity of supply is too low, either because of long production times, low occupational mobility of the factors of production used, or high sunk costs in the industry, the firm will likely find it nigh on impossible to switch production to that of an inferior goods, thus highly limiting the potential effectiveness of such a policy. As such, in the cases where the firm would struggle to lower the price or change the nature of the good they are producing, a possible third policy can be implemented. The firm can attempt to use marketing techniques such as increased spending on advertising in order to increase demand and lower the price elasticity of demand. ...read more.

This would be particularly true in the case of a recession, where the firm might be forced to cut costs in order to maintain an adequate level of profitability and cash flow. Moreover, the firm might be selling products which do not need advertising, such as necessity goods (i.e salt, housing, basic food items) which most people will already know about and purchase on a regular basis regardless of advertising thus making such spending wasteful and unimpactful. Overall, I believe that the change in the nature of the good produced to an inferior good is by far the most likely method to be successful in maintain revenue, due to the fact that, by their very nature, inferior goods experience an increase in demand when incomes fall, thus allowing the firm to have an increase in sales volumes and, in turn, an increase in sales revenue. If the firm can afford to implement this, a change in the nature of the product to an inferior good will raise revenues in almost all scenarios where incomes are falling. ...read more.