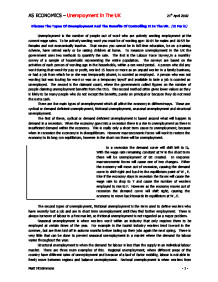 Discuss the Types of Unemployment and the Benefits of Controlling It In the UK.

Discuss The Types Of Unemployment And The Benefits Of Controlling It In The UK. (20 Marks) Unemployment is the number of people out of work who are actively seeking employment at the current wage rates. To be actively seeking work you must be of working age: 16-64 for males and 16-59 for females and not economically inactive. That means you cannot be in full time education, be on a training scheme, have retired early or be raising children at home. To measure unemployment in the UK the government uses two methods to quantify the rate. The first is the Labour Force Survey, in a monthly survey of a sample of households representing the entire population. The surveys are based on the activities of each person of working age in the households, within a one week period. A person who did any work during that week for pay or profit, worked 15 hours or more as an unpaid worker in a family business, or had a job from which he or she was temporarily absent, is counted as employed. A person who was not working but was looking for work or was on a temporary lay-off and available to take a job is counted as unemployed. ...read more.