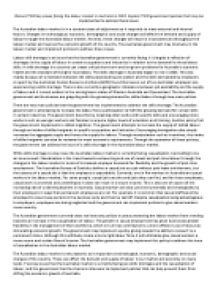 Discuss TWO key issues facing the labour market in Australia in 2012. Explain TWO government policies that may be implemented to address these issues

﻿Discuss TWO key issues facing the labour market in Australia in 2012. Explain TWO government policies that may be implemented to address these issues. The Australian labour market is in a constant state of adjustment as it responds to many external and internal factors. Changes in technological, economic, demographic and social changes will affect the demand and supply of labour through the Australian labour market. At times, these changes will result in inconsistencies throughout the labour market and repress the economic growth of the country. The Australian government may intervene in the labour market and implement policies to address these issues. Labour skill shortage is an issue that the Australian government is currently facing. It is largely a reflection of shortages in the supply of labour in certain occupations and industries in relation to the demand for these labour skills. A skills shortage in a country can create critical short term and long term problems for Australia?s economic health and the standard of living for Australians. ...read more.

Another policy that the government implements is skilled migration. The government attempts to increase the supply of skilled labour through an intake of skilled migrants in specific occupations and industries. Encouraging immigration also simply increases the aggregate supply and hence the supply for labour. Through manipulation such as incentives, the intake of skilled migrants can also be reviewed to meet economic requirements. Through the operation of these policies, the government can address the issue of a skills shortage in the Australian labour market. While skills shortage is a key issue the Australian labour market is currently facing, casualisation is providing to be an issue as well. Casualisation is the trend towards outsourcing and use of casual and part-time labour through the changes in the labour market in terms of increased employer demands for flexibility and the growth of part-time employment. The Australian Bureau of Statistics defines a casual job as a job without paid leave entitlements, but the essence of a casual job is that the employee is expendable. ...read more.

The growth in casual employment has given businesses greater flexibility in the management of their workforce, which in turn has contributed to a more efficient use of resources stimulating economic growth. The government may implement a policy giving casuals the ability to convert to a permanent status. Although this will likely create a more rigid labour force it will ultimately give casual workers a more secure and certain flow of income. The Australian government may implement this policy to address the issue of casualisation in the Australian labour market. The Australian labour market is very dynamic as it responds to technological, economic, demographic and social changes of the country. These can affect the demand and supply of labour in our market and economy on many levels. Two key issues that the Australian market is currently facing are skills shortages and the casualisation of labour, and the government has the choice to intervene to implement policies that can help prevent them from stifling the economic growth of Australia. ...read more.