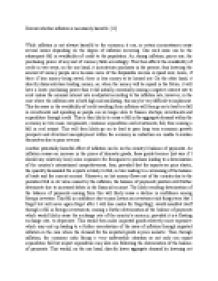 Transfer-Encoding: chunked ﻿Discuss whether inflation is necessarily harmful. [12] While inflation is not always harmful to the economy, it can, in certain circumstances cause several issues depending on the degree of inflation occurring. One such issue can be the subsequent fall in availability of credit to the population. As, during inflation, prices rise, the purchasing power of any unit of currency falls accordingly. This then affects the availability of credit in two ways, on the one hand, it incentivizes purchases in the present, thus lowering the amount of money people save because more of the disposable income is spend now, hence, if there if less money being saved, there is less money to be loaned out. On the other hand, it directly disincentivises lending money, as, when the money will be repaid in the future, it will have a lower purchasing power than it did initially, essentially causing a negative interest rate to exist unless the nominal interest rate is adjusted according to the inflation rate, however, in the case where the inflation rate is both high and oscillating, this may be very difficult to implement. ...read more.

Moreover, as hot money flows out of the country due to the persistent fall in its value caused by the inflation, the balance of payments position will further deteriorate due to increased debits in the financial account. The likely resulting deterioration of the balance of payments ensuing from this will likely cause a decline in confidence among foreign investors. This fall in confidence due to poor [return on investment risk thingy term that I forgot but will never again forget after I will lose marks for forgetting], would manifest itself through a fall in foreign investments, causing a further deterioration of the balance of payments which would likely cause the exchange rate of the country?s currency, provided it is a floating exchange rate, to depreciate. This would then make imported goods relatively more expensive which may end up leading to a further exacerbation of the issue of inflation through imported inflation in the case where the demand for the imported goods is price inelastic. ...read more.

more to be consumed at a lower price, thus increasing welfare, GDP and allowing for better international competitiveness, in turn leading to a likely improvement in long term growth prospects, a fall in unemployment and a likely improvement of the balance of payments. Moreover, creeping inflation can allow for a lessening of the debt burden on borrowers, thus, once again incentivizing increased investments and spending within the economy by making it easier for people fund startups and expenditure through credit as the loan becomes easier to pay back. Overall, while certain types of inflation, particularly unpredictable oscillating inflation and hyperinflation can have devastating impacts on the economy by causing a widespread loss of confidence and various other issues including unwanted fiscal drag and wealth redistribution, inflation is by no means necessarily harmful. Provided that the rate of inflation is relatively small and steady at 2-3% it can allow for higher optimism and a lessening of the debt burden leading to stronger incentives for producers to expand, thus promoting an increase in output and helping economic growth. ...read more.