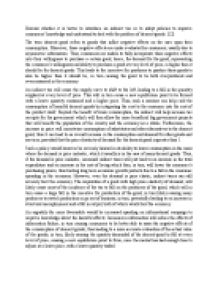 Discuss whether it is better to introduce an indirect tax or to adopt policies to improve consumers knowledge and understand to deal with the problem of demerit goods. [12]

Transfer-Encoding: chunked ﻿Discuss whether it is better to introduce an indirect tax or to adopt policies to improve consumers? knowledge and understand to deal with the problem of demerit goods. [12] The term demerit good refers to goods that inflict negative effects on the user upon their consumption. Moreover, these negative effects are under evaluated by consumers, usually due to asymmetric information. Thus, consumers are unable to fully incorporate these negative effects into their willingness to purchase a certain good, hence, the demand for the good, representing the consumer?s willingness and ability to purchase a good at every level of price, is higher than it should be for demerit goods. This leads to the incentive for producers to produce these goods to also be higher than it should be, in turn causing the good to be both overproduced and overconsumed in the economy. An indirect tax will cause the supply curve to shift to the left, leading to a fall in the quantity supplied at every level of price. ...read more.

Thus, if the demand is price inelastic, increased indirect taxes will just lead to an increase in the total expenditure and an increase in the cost of living which then, in turn, will lower the consumer?s purchasing power, thus hurting long term economic growth protects due to a fall in the consumer spending in the economy. However, even the demand is price elastic, indirect taxes can still severely hurt the economy. The imposition of a good with high price elasticity of demand, will likely cause most of the incidence of the tax to fall on the producers of the good, which will in turn cause a large fall in the incentive for production of the good, in turn likely causing many producers to switch production or go out of business, in turn, potentially leading to an increase in structural unemployment and a fall in output, both of which would hurt the economy. An arguably far more favourable would be increased spending on informational campaign to improve knowledge about the harmful effects. ...read more.

Moreover, even if the cost is not too high, the opportunity cost of the project might be too high and, as such, other more socially beneficial projects could be implemented instead. Finally, such a project would be highly ineffective the education level in the nation is relatively high and the cause for overconsumption is not asymmetric knowledge, but rather a disregard for the negative side effects. Overall, seeing as overconsumption of demerit goods is an inherently demand driven issue, I would argue that the suitable policy would clearly be one that aims to influence the demand for the product, hence, the increases in education. This will be as long as the government has sufficient funds in order to run the program and as long as the opportunity cost does not make the program unjustifiable. Furthermore, such a program would be most effective in the case where information failure is the main cause of the overconsumption of the demerit good, thus, the education level should also be taken into consideration by the government policymakers before making the decision. ...read more.