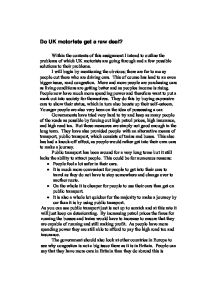 Do UK motorists get a raw deal?

Do UK motorists get a raw deal? Within the contents of this assignment I intend to outline the problems of which UK motorists are going through and a few possible solutions to their problems. I will begin by mentioning the obvious; there are far to many people out there who are driving cars. This of course has lead to an even bigger issue, road congestion. More and more people are purchasing cars as living conditions are getting better and as peoples income is rising. People now have much more spending power and therefore want to put a mark out into society for themselves. They do this by buying expensive cars to show their status, which in turn also boosts up their self-esteem. Younger people are also very keen on the idea of possessing a car. Governments have tried very hard to try and keep as many people of the roads as possible by forcing out high petrol prices, high insurance, and high road tax. ...read more.

As you can see public transport just is not up to scratch and at this rate it will just keep on deteriorating. By increasing petrol prices the fares for running the busses and trains would have to increase to ensure that they are capable of running and still making profit. As people have more spending power they are still able to afford to pay the high road tax and insurance. The government should also look at other countries in Europe to see why congestion is not a big issue there as it is in Britain. People can say that they have more cars in Britain than they do abroad this is obviously not the case as there are only five other countries in Europe that have less cars than Britain. People in other European countries also tend to use public transport and bicycle much more often than we do in Britain. ...read more.

This would be one of the obvious ways to reduce people of the roads but this in turn has a set back as companies would have to force prices up and this will cause inflation and unemployment. What they can do is try to spend more money on public transport to make more reliable. So that there are more trains and buses running so that people feel comfortable instead of being squashed up in a small space. They can also reduce fares slightly so that people would now be more perceptive towards travelling on trains and buses. They can also increase security so that people will feel a lot safer travelling by using public transport. On the whole the government have a lot to do and I have mentioned a few strategies, it will take quite a bit of time but if they do not start to impose a few changes they will just make matters a whole lot worse. ...read more.