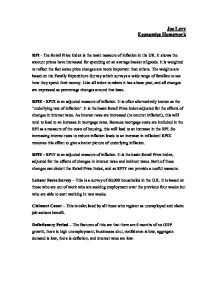 Joe Levy Economics Homework RPI - The Retail Price Index is the main measure of inflation in the UK. It shows the amount prices have increased for spending on an average basket of goods. It is weighted to reflect the fact some price changes are more important than others. The weights are based on the Family Expenditure Survey which surveys a wide range of families to see how they spend their money. Like all index numbers it has a base year, and all changes are expressed as percentage changes around that base. RPIX - RPIX is an adjusted measure of inflation. It is often alternatively known as the "underlying rate of inflation". It is the basic Retail Price Index adjusted for the effects of changes in interest rates. As interest rates are increased (to counter inflation), this will tend to lead to an increase in mortgage rates. Because mortgage costs are included in the RPI as a measure of the costs of housing, this will lead to an increase in the RPI. ...read more.

The problems of a wage-price spiral - price rises can lead to higher wage demands as workers try to maintain their real standard of living. Higher wages over and above any gains in labour productivity causes an increase in unit labour costs. To maintain their profit margins they increase prices. The process could start all over again and inflation may get out of control. Higher inflation causes an upward spike in inflationary expectations that are then incorporated into wage bargaining. It can take some time for these expectations to be controlled. Higher inflation expectations can cause an outward shift in the Phillips Curve. Consumers and businesses on fixed incomes will lose out. Many pensioners are on fixed pensions so inflation reduces the real value of their income year on year. The state pension is normally updated each year in line with average inflation so that the real value of the pension is not reduced. Shoe leather costs - when prices are unstable there will be an increase in search times to discover more about prices. ...read more.

Unemployment wastes some of the scarce resources used in training workers. Furthermore, workers who are unemployed for long periods become de-skilled as their skills become increasingly dated in a rapidly changing job market. This reduces their chances of gaining employment in the future, which in turn increases the economic burden on government and society. See the revision page on long term unemployment. Rising unemployment is linked to social and economic deprivation - there is some relationship between rising unemployment and rising crime and worsening social dislocation (increased divorce, worsening health and lower life expectancy). Areas of high unemployment will also see a decline in real income and spending together with a rising scale of relative poverty and income inequality. As younger workers are more geographically mobile than older employees, there is a risk that areas with above average unemployment will suffer from an ageing potential workforce - making them less attractive as investment locations for new businesses. It is clear therefore that unemployment carries substantial economic and social costs. These costs are greatest when long-term structural unemployment is high. Indeed many governments focus their Labour market policies on improving the employment prospects of the long-term unemployed. ...read more.