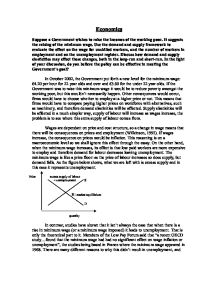 Economics - Suppose a Government wishes to raise the incomes of the working poor.

Economics Suppose a Government wishes to raise the incomes of the working poor. It suggests the raising of the minimum wage. Use the demand and supply framework to evaluate the effect on the wage for unskilled workers, and the number of workers in employment and on the unemployment register. Discuss how demand and supply elasticities may effect these changes, both in the long-run and short-run. In the light of your discussion, do you believe the policy can be effective in meeting the Government's goal? In October 2002, the Government put forth a new level for the minimum wage: �4.20 per hour for 22 year olds and over and �3.60 for the under 22 year olds. If the Government was to raise this minimum wage it would be to reduce poverty amongst the working poor, but this wouldn't necessarily happen. Other consequences would occur, firms would have to choose whether to employ at a higher price or not. This means that firms would have to compare paying higher prices on workforce with alternatives, such as machinery, and therefore demand elasticities will be affected. ...read more.

This means that they will have to reduce the number of employees because the increase of wage will be used on the new machine, so unemployment increases. However, this isn't possible for all enterprises, there are some that rely on human capital and can't replace it with machinery, such as cleaners or catering staff. There isn't yet any technology that can replace a hotel room cleaner, so when the minimum wage increases it can't have any effect on these jobs, the amount of people employed will stay the same. Another alternative for firms when the minimum wage increases could be that they would rather employ workers with higher qualifications for a similar wage to the level at which the new minimum wage will be set at. This would mean that all of the employees that were working poor will be dismissed, and would have terrible consequences on the level of unemployment. One last possibility for firms who want to get around the problem of paying higher wages would be to delocalise there enterprise. Many enterprises have already done this, especially in the clothing sector. Firms, for example Nike, have moved from the USA to Taiwan where the price of labour is much cheaper. ...read more.

The same will happen with the elasticities of supply of labour, it will take a certain amount of time before people can insert themselves into the workforce because, for example, it takes time to find a job. This means that in the short-run elasticities regarding the supply of labour will be low, but in the long-run will be high since these changes will have had the time to occur. If the Government was to raise the minimum wage it would be to reduce poverty amongst the working poor, trying to maintain employment at the same rate if not increasing it. Keynes would approve of this Government's choice, but the Classicals wouldn't, claiming that it would lead to classic unemployment (Kregel, Matzner & Roncaglia, 1988). Whether or not this policy would work has been explained above, showing two different points of view. However, it is important to observe that with the economic crisis of the 70's and 80's, governments in Britain, France and the USA used Keynesian politics to help the growth of employment, and they proved to be unsuccessful. Because of this inefficiency, we saw the liberal thoughts coming back into the governments, with M.Thatcher in Britain, Mitterand in France and Reagan in the USA, to try to remedy this situation. It was in this context that globalisation started developing. ...read more.