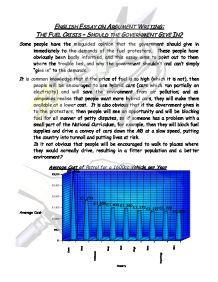 English Essay on Argument Writing:The Fuel Crisis &amp;#150; Should the Government Give In?

ENGLISH ESSAY ON ARGUMENT WRITING: THE FUEL CRISIS - SHOULD THE GOVERNMENT GIVE IN? Some people have the misguided opinion that the government should give in immediately to the demands of the fuel protesters. These people have obviously been badly informed, and this essay aims to point out to them where the trouble lies, and why the government shouldn't and can't simply "give in" to the demands. It is common knowledge that if the price of fuel is so high (which it is not), then people will be encouraged to use hybrid cars (cars which run partially on electricity) and will save the environment from air pollution; and as companies realise that people want more hybrid cars, they will make them available at a lower cost. ...read more.

And if the government does reduce the tax, what good will that be? No good at all, because then people will be demanding more money for schools and hospitals, which the Government won't be able to give because the money isn't coming in from the fuel tax. I don't want to have to deprive children of an education, I don't want to make rail safety worse, and I certainly don't want to deny people a proper health service. It may be true that fuel duties are lower in France, but that is simply because all their other taxes are higher than the British equivalents. People seem to think that the protests are damaging the British economy, but that is untrue, as many companies have this week announced higher profits than expected. ...read more.

These are meant to entertain and catch the reader's eye, not to inform them of anything (of course, if they want to be informed, why are they reading a tabloid?). A recent survey conducted by The Independent LLU showed that over 69% of people in the country actually took the tabloid cartoons seriously, and of that 98% owned cars. On considering the various issues surrounding the crisis, only two clear alternative can be reached - the government do not give in and we stay a democracy, or the government gives in, another group form, who want the education system to change, block petrol supplies, etc, and the government will have to give in because they gave in to the petrol protests. I certainly won't be depriving my children's education (leading to being stuck in a dead-end job all their lives) will you? ...read more.