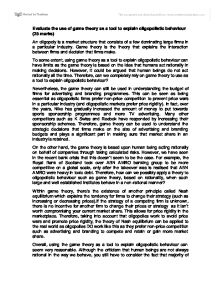 On the other hand, the game theory is based upon human being acting rationally on behalf of companies through taking calculated risks. However, we have seen in the recent bank crisis that this doesn't seem to be the case. For example, the Royal Bank of Scotland took over ABN AMRO banking group to be more competitive on a global scale, only after the takeover was is realised that ABN AMRO were heavy in toxic debt. Therefore, how can we possibly apply a theory to oligopolistic behaviour such as game theory, based on rationality, when such large and well established institutes behave in a non-rational manner? ...read more.

Understanding this is essential when discussing the game theory. Nevertheless, making a decision on behalf of a company can still carry risks which individuals are willing to take in order to benefit from rewards and bonuses. In other words, although people are capable of acting rationally, they STILL may choose not to under certain circumstances. Therefore, to suggest the game theory can be used as a unique and specific tool to explain oligopolistic behaviour would be wrong as it carries the flaws I have just mentioned. But, to use as an indicator of how oligopolies may behave under certain circumstances against other firms in a particular industry is a suitable tool. ...read more.