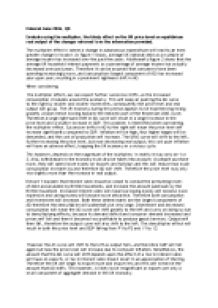 Evaluate using the multiplier, the likely effect on the UK price level an equilibrium real output of the changes referred to in the information provided.

﻿Edexcel June 2006, QD Evaluate using the multiplier, the likely effect on the UK price level an equilibrium real output of the changes referred to in the information provided. The multiplier effect is where a change in autonomous expenditure will lead to an even greater change in income. As figure 1 shows, average UK national debt as a multiple of average income has increased over the past few years. Additionally figure 2 shows that the average UK household interest payments as a percentage of average income has actually decreased over past years. Therefore it can be assumed that consumers have been spending increasingly more, and consumption (largest component of AD) has increased year upon year, resulting in a prominent rightward shift in AD. When considering the multiplier effect, we can expect further successive shifts, as the increased consumption circulates around the economy. This will keep on pushing the AD curve to the right by smaller and smaller increments, consequently the price level and real output will go up. ...read more.

Therefore the price level may only rise slightly more than the increase in real output. Extract 1 explains that interest rates should be raised to combat the perturbing levels of debt accumulated by British households, and increase the amount paid back by the British household. Increased interest rates will mean borrowing money will become more expensive and saving money will become more attractive. Therefore both consumption and investment will decrease. Both these determinants are the largest components of AD therefore the demultiplier will potentially be very large. Divestment and decreased consumption will mean the AD curve will shift greatly to the left and carry on doing so due to demultiplying effects; because its demand deficit and consumer demand decreased and prices will fall and then it becomes less profitable to produce goods/services. Output will then fall, therefore the output curve will also shift to the left. The demultiplier effect will result in both the price level and GDP falling from P1 to P2 and Y1 to Y2. ...read more.

This will result in a rise in inflation. If UK exports were to rise considerably then this would make it a greater component of AD. Greater exports will be an injection into the economy. This will mean due to the multiplier that AD will keep on shifting to the right. Also, the trade deficit will be reduced. UK firms will see more demand, and it will become more profitable to export and therefore output will increase. The AS curve will shift to the right which is good as GDP will rise but the price level will fall. However, this all depends upon the fact that the UK can take advantage of the increased growth in other countries. Competition is high, and the UK will find it hard to compete with other countries such as China due to wages being higher and increased regulation, all of which increase the costs of production. The UK therefore may struggle to export more especially if interest rates rise and investment decreases. ...read more.