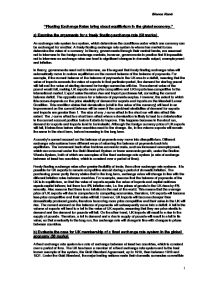 Examine the arguments for a freely floating exchange rate

"Floating Exchange Rates bring about equilibrium in the global economy." a) Examine the arguments for a freely floating exchange rate (50 marks) An exchange rate system is a system, which determines the conditions under which one currency can be exchanged for another. A freely floating exchange rate system is where free market forces determine the value of a currency. In theory, governments through their central banks, are assumed not to intervene in the foreign exchange markets, however, governments in practice find it impossible not to intervene as exchange rates can lead to significant changes in domestic output, unemployment and inflation. In theory, governments need not to intervene, as it is argued that freely floating exchange rates will automatically move to restore equilibrium on the current balance of the balance of payments. For example, if the current balance of the balance of payments in the UK was in a deficit, meaning that the value of imports exceeds the value of exports in that particular period, the demand for sterling pound will fall and the value of sterling demand for foreign currencies will rise. The external value of the pound would fall, making UK exports more price competitive and UK imports less competitive in the international market. ...read more.

Long-term deficit countries tend to suffer from deflationary forces, which results from the deficit. If the UK were to enter a fixed exchange rate system, the rate would be limited in flexibility for adjustment. For example, the ERM (although an example of a managed exchange rate system) the UK exchange rate was limited in being 21/4% or 6% either side of the parity. Also, this creates some certainty, as one knows it will not exceed 6% but there is still uncertainty in its leeway of the 6%. Domestic adjustments for GDP by use of fiscal and monetary policies would have to be consistent with the fixed exchange rate, as the exchange rate has significant impacts on domestic inflation, employment and output. If the UK were to join a fixed rate exchange system, such as the European Monetary Union (EMU), a single currency would be in place between the countries. The transition costs of such a procedure are costly, but even more so if the EMU ceases to function. There would be a loss of independence surrounding fiscal and monetary decisions however there will be no exchange rate costs between member countries. Although, it would be advantageous for the UK to join the EMU on the basis that UK business are more open to a wider base of consumers, a loss of independence for such an important financial base may be costly. Bianca Ren� 1 ...read more.