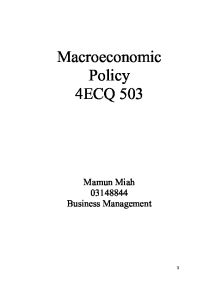 Macroeconomic Policy 4ECQ 503 Mamun Miah 03148844 Business Management (a) Examine the difficulties which confront policy makers when they attempt to formulate macroeconomic policy. Macroeconomic policy is mainly concerned with attempting to intervene and change the functioning of the economy in order to improve its performance1. It is used by the government and Central Banks (Bank of England), usually intended to maximise growth while keeping inflation and unemployment down. To summarise macroeconomic policy involves three initial steps: 1. The determination of the policy objectives and the conflicts between objectives. 2. The formulation of policies, which are known as instruments, are consistent with attaining the objectives. 3. Some elementary cost-benefit calculations of policy effectiveness to ensure that the net benefits outweigh the costs involved. The four major objectives of macroeconomic policy are2: * Full employment- unemployment is to be avoided because it results in a decrease of output in the economy. In addition, unemployment reduces the incomes of former workers, increases poverty and leads to demoralisation among the unemployed. * Price stability- inflation is regarded as a major source of concern because it confers few benefits but imposes major costs on society. For example, people on fixed incomes suffer a fall in their standard of living; debtors gain at the expense of creditors as the real value of debts or loans fall; and country's exports become uncompetitive in international trade. ...read more.

The estimated time lag is often one year or more. A year is a long time for an economy and government policies may end up stabilising effect rather than a stabilising one. The three types of time lags involved in the process are recognition lags, implementation lags and response lags6. * Recognition lag is when the government discovers that policy intervention is called for. The government take time to recognise the existence of a boom or slump. It takes time for data to be collected and elaborated into useful information. * Implementation lag is the time it takes in implementing a policy. Once a recession or a boom has been established and identified, it takes time to agree on which policy to choose and to implement it. * Response lag is the time it takes for the economy to respond to the applied policy. Even if implemented quickly, policies take time to produce their effects. This is especially true of monetary policy. It takes several months before the easing of money market conditions and depreciating exchange rates have an impact on real activity. Any macroeconomic policy with a significant impact on economy will require legislative approval. Legal restrictions on public revenue and expenditure make fiscal policies inflexible. ...read more.