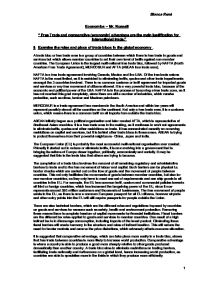 Examine the roles and place of trade blocs in the global economy.

Economics - Mr. Russell " Free Trade and comparative (economic) advantage are the main justification for international trade." i) Examine the roles and place of trade blocs in the global economy. A trade bloc or free trade area is a group of countries between which there is free trade in goods and services but which allows member countries to set their own level of tariffs against non-member countries. The European Union is the largest multi-national free trade bloc, followed by NAFTA (North American Free Trade Agreement), MERCOSUR and AFTA (ASEAN free trade area). NAFTA is a free trade agreement involving Canada, Mexico and the USA. Of the free trade unions NAFTA is the most limited, as it is restricted to eliminating tariffs, quotas and other trade impediments amongst the 3 countries involved. There is no common customs or tariff agreement for imported goods and services or any free movement of citizens allowed. It is a very powerful trade bloc, because of the economic and political power of the USA. NAFTA is in the process of becoming a free trade zone, as it has not reached this goal completely, since there are still a number of industries, which receive protection, such as citrus, lumber and Mexican petroleum. ...read more.

Specialisation is increased in the free trade area. A larger market allows countries to allocate their resources in producing goods or services, of which they can produce well, rather than producing them inefficiently when other countries can provide them at lower prices (comparative advantage). For example, in NAFTA, it is clear that in the foreseeable future that Mexico will become the home of assembly industries that use low-cost labour. Such industries include computer parts, automotive and textiles. Mexico will then specialise in manufacturing goods, which will therefore become extremely productive. A drawback to the free trade agreement is interdependency. As countries become more specialised, they become more dependent on their trading partners, meaning that each country will loose some control over its economy. Decisions of foreign countries can then greatly affect decisions in the domestic country. For example, is essential foods are not grown in the domestic economy, or political conflicts take place, or a strike in the manufacturing sector of a company, which is based in another country will surely have an effect other sectors of the firm, which are set in another country. ...read more.

For example, a Japanese firm will pay the tariff to import its goods into France and then it can ship its goods around the EU freely. However, the tariffs increase costs for the Japanese firm, meaning the price of its good may be more expensive in comparison to a homogenous product produced in the EU, and may cause consumers in the EU to buy domestically produced goods rather than the Japanese good. One will then over time be able to see an increase in employment and income. A larger market will give rise to expansions in companies and demand labour at all levels in the company, from manufacturing to distribution. Taking NAFTA as an example, manufacturing and assembly plants will be set up in Mexico, creating job opportunities for Mexicans, and increasing consumption of goods or services for the US or Canadian firm, seeking low-cost labour. The increased income of Mexican workers has increased the consumption of US and Canadian goods and services. This increases employment of high-paying jobs in Canada and the USA. In Mexico, Canada and the USA, income will have risen and in the long run so will economic growth and the standard of living. Bianca Ren� 1 1 ...read more.