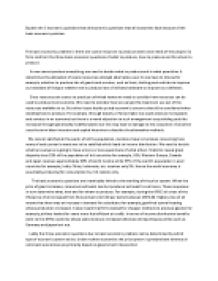 Explain the 3 economic questions all economies face because of the basic economic problem.

objection to such arrangement crop yielding could be increased through genetically modified plants but this may lead to damage to the ecosystem. Economist uses the term labor intensive and capital intensive to describe the alternative methods. We cannot satisfied all the wants of all the population, decisions have to be taken concerning how many of each person's wants are to be satisfied which leads to income distribution. We need to decide whether everyone is going to have a more or less equal share of what others. Statistics reveal great disparity since 15% of the population of rich countries for example, USA, Western Europe, Canada and Japan receives approximately 80% of world income while 57% of the world's population in poor countries for example; India, China, Indonesia, etc. ...read more.

For example, during the OPEC oil crises of the 70s (price of oil increased from $12 per barrel to $30 per barrel between 1978-80. Higher price of oil meant that there was an increase in demand for substitutes for example; gas-fired central heating whose production increased. It also meant that firms looked for cheaper methods to produce goods ( for example; airlines looked for some more fuel efficient air craft). In terms of income distribution benefits went to the OPEC countries whose sales revenues increased whereas oil-importing countries such as Germany and japan lost out. Lastly the three economic questions due to basic economic problem can be determined by which type of economic system exists. Under market economies the price system is predominant whereas in command economies are primarily based on government intervention ...read more.