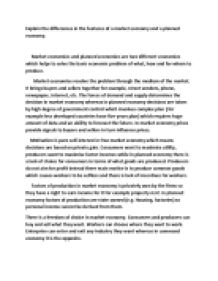 ﻿Explain the differences in the features of a market economy and a planned economy. Market economies and planned economies are two different economies which helps to solve the basic economic problem of what, how and for whom to produce. Market economies resolve the problem through the medium of the market. It brings buyers and sellers together for example, street vendors, phone, newspaper, internet, etc. The forces of demand and supply determines the decision in market economy whereas in planned economy decisions are taken by high degree of government control which involves complex plan ( for example less developed countries have five years plan) ...read more.

Producers do not aim for profit instead there main motive is to produce common goods which causes workers to be selfless and there is lack of incentives for workers. Factors of production in market economy is privately own by the firms so they have a right to earn income for it for example property rent. In planned economy factors of production are state owned (e.g. Housing, factories) so personal income cannot be derived from them. There is a freedom of choice in market economy. Consumers and producers can buy and sell what they want. Workers can choose where they want to work. Enterprise can enter and exit any industry they want whereas in command economy it is the opposite. ...read more.

Soap, powder, cars etc. This leads to poor quality goods. In free market economy prices act as a rationing device. They ration scarce goods to those who can afford to pay. Resources are allocated to those who have higher spending power. This may cause unequal income distribution. Whereas in planned economy price fixing is by government. Production doesn't respond to surplus and shortages as under the price system. Government imposes maximum prices for e.g. Rent control in case of shortages to protecy consumers and minimum prices for e.g. Agriculture to protect producers. Each of the market systems have their own advantages and disadvantages therefore nowadays we have mixed economies which is a mixture of planned and free market economy. It covers the drawbacks of both the systems. ...read more.