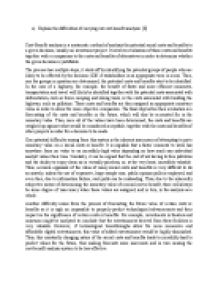 Explain the difficulties of carrying out cost-benefit analysis. [8]

Then, once all of the values have been determined, the costs and benefits are weighed up against what would be considered acceptable, together with the costs and benefits of other projects in order for a decision to be made. One potential difficulty arising from this system is the inherent inaccuracy of attempting to put a monetary value on a social costs or benefit. It is arguable that a faster commute to work has anywhere from no value to an incredibly high value depending on how much any individual analyst values their time. Similarly, it can be argued that the cost of not having to face pollution and the ability to enjoy clean air is virtually priceless, or, at the very least, incredibly valuable. ...read more.

Another difficulty arises form the process of forecasting the future value of certain costs or benefits as it is nigh on impossible to properly predict technological advancements and their impact on the significance of certain costs or benefits. For example, investments in theaters and museums might be analysed to conclude that the entertainment derived from these facilities is very valuable. However, if technological breakthroughs allow for more immersive and affordable digital entertainment, this value of added entertainment would be highly diminished. Thus, this constantly changing nature of the social costs and benefits leads to incredibly hard to predict values for the future, thus making forecasts more inaccurate and in turn causing the cost-benefit analysis system to be less effective. ...read more.