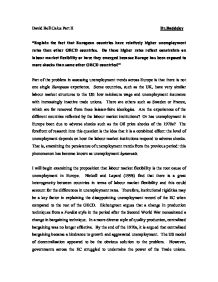 Explain the fact that European countries have relatively higher unemployment rates than other OECD countries.

David Bell Caius Part II Dr.Baddeley "Explain the fact that European countries have relatively higher unemployment rates than other OECD countries. Do these higher rates reflect constraints on labour market flexibility or have they emerged because Europe has been exposed to more shocks than some other OECD countries?" Part of the problem in assessing unemployment trends across Europe is that there is not one single European experience. Some countries, such as the UK, have very similar labour market structures to the US: low minimum wage and unemployment insurance with increasingly inactive trade unions. There are others such as Sweden or France, which are far removed from these laissez-faire ideologies. Are the experiences of the different countries reflected by the labour market institutions? Or has unemployment in Europe been due to adverse shocks such as the Oil price shocks of the 1970s? The forefront of research into this question is the idea that it is a combined effect: the level of unemployment depends on how the labour market institutions respond to adverse shocks. That is, examining the persistence of unemployment trends from the previous period: this phenomenon has become known as unemployment hysteresis. I will begin examining the proposition that labour market flexibility is the root cause of unemployment in Europe. Nickell and Layard (1998) find that there is a great heterogeneity between countries in terms of labour market flexibility and this could account for the differences in unemployment rates. ...read more.

A rise in the price of an imported material will have the effect of causing unemployment to rise if profit margins are to be maintained. W/P BRW 0 PRW 0 PRW 1 E1 E0 Employment Figure 3: The figure shows the downward shift of the Price-determined Real Wage (PRW) while the Bargained Real Wage (PRW) is constant. This causes employment, on the horizontal axis, to fall to E1. This raises the equilibrium level of unemployment. Bruno and Sachs contend that this diverted attention away from the most significant factor in determining unemployment, total factor productivity (TFP). Through the 1980s, when the price effects of the Oil shocks were reversed, the high level of interest rates kept unemployment high when the effect of a declining TFP was diminishing. Macroeconomic policy probably delayed some of the increase in unemployment from the 1970s to the 1980s. Partially due to the declining TFP, adverse labour demand shifts can potentially account for why unemployment has remained high into the 1990s. High world interest rates had a severe effect on the unemployment rate in the UK due to a simultaneous structural shift in the labour market: the discovery of North Sea Oil in the late 1980s caused the current account balance to improve which led to an appreciation of sterling. Manufacturers find capturing and retaining export markets difficult with a 'strong' pound, which causes redundancies in the manufacturing industry. ...read more.

Thus rates of capacity utilisation begin to rise again. High rates of capacity utilisation widen profit margins. Because the firm lacks ability to take advantage of this due to its lack of capacity, prices rise. As prices respond, the equilibrium rate of unemployment will be shifted up as prices respond to the shortage of capacity in the economy. This disparity is eventually redressed through fluctuations in prices. In conclusion, higher European unemployment rates tend to be a reflection of a lower level of institutional flexibility and also adjustment flexibility rather than a greater degree of shocks. Predominantly global shocks have affected the OECD area and thus should have had a unilateral affect on unemployment rates. Therefore, it is the adjustment process in the response to these global shocks that determines a country's unemployment performance. Pure hysteresis effects could account for some of the unemployment present in the 1970s. Impure hysteresis effects have greater explanatory power through the 1980s when trade union power was in decline: between, 1979-86, long-term unemployment rose from 20 to 40 per cent in the UK and Europe. This is due to the reduced search effectiveness of the unemployed 'outsiders', rather than the effect of 'insiders'. The capacity scrapping form of unemployment persistence is a possible explanation for the twin observations of a return to 'normal' levels of capacity utilisation in 1979 and 1985 in the UK despite the presence of continuing rises in unemployment over the period as a whole. The concept of hysteresis is still in its infancy and requires further empirical and theoretical extension. ...read more.