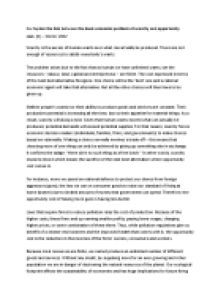 Explain the link between the basic economic problem of scarcity and opportunity cost.

﻿2a. Explain the link between the basic economic problem of scarcity and opportunity cost. [8] ? Winter 2002 Scarcity is the excess of human wants over what can actually be produced. There are not enough of resources to satisfy everybody?s wants. The problem arises due to the fact that as human we have unlimited wants, yet the resources ? labour, land, capital and entrepreneur ? are finite. The cost expressed in terms of the next best alternative foregone. One choice will be the ?best? one and a rational economic agent will take that alternative. ...read more.

to make choices based on rationality. Making a choice normally involves a trade-off ? this means that choosing more of one thing can only be achieved by giving up something else in exchange. It confirms the adage: ?there ain?t no such thing as a free lunch.? In other words, scarcity involves choice which means the sacrifice of the next best alternative where opportunity cost comes in. For instance, more we spend on national defence to protect our shores from foreign aggressors (guns), the less we can on consumer goods to raise our standard of living at home (butter) due to limited amount of money that government can spend. ...read more.

Because most resources are finite, we cannot produce an unlimited number of different goods and services. Without any doubt, by supplying more for an ever-growing and richer population we are in danger of destroying the natural resources of the planet. Our ecological footprint affects the sustainability of economies and has huge implications for future living standards. At the heart of improving sustainability of resources is the idea of de-coupling ? a process of trying to increase the efficiencies with which resources are used and breaking the link between increasing demand and resource depletion. Thus, better choices have to be made. ...read more.