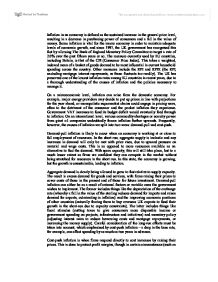 Explain the possible causes of inflation

Inflation in an economy is defined as the sustained increase in the general price level, resulting in a decrease in purchasing power of consumers and a fall in the value of money. Some inflation is vital for the macro economy in order to maintain adequate levels of economic growth, and since 1997, the UK government has recognised this fact by allowing The Bank of England Monetary Policy Committee to target a rate of 2.0% over the past fifteen years or so. The measure currently used by EU countries, including Britain, is that of the CPI (Consumer Price Index). This takes a weighted, indexed mean of a basket of goods deemed to be most influential in current household spending across the country. Other measures include the RPI and RPIX (the RPI, excluding mortgage interest repayments, as these fluctuate too readily). The UK has preserved one of the lowest inflation rates among EU countries in recent years, due to a thorough understanding of the causes of inflation and the policies necessary to manage it. ...read more.

The former includes things like the depreciation of the exchange rate (whereby a fall in the value of the sterling reduces demand for imports and raises demand for exports, culminating in inflation) and the improving economic positions of other countries (naturally forcing them to buy overseas UK exports to fund their growth in the short-run due to capacity constraints). The latter includes things like fiscal stimulus (cutting taxes to give consumers more disposable income or government spending on projects, infrastructure and initiatives) and monetary policy (adjusting interest rates to reduce borrowing costs and mortgage repayments, or increasing the money supply). Careful consideration of the long-run effects must be taken into account, which emphasised by cost-push inflation - a drop in the base rate, for example, can affect spending by as much as two years in advance. Cost-push inflation is when firms respond directly to cost increases by raising their prices. This is done to protect profit margins, though in certain circumstances (such as the financial crisis of 2008), firms in oligopolies and monopolies with lots of market power may decide to absorb some or all of their profit losses. ...read more.

The quantity theory demonstrates how the excess supply of money in the financial system, in relation to the number of goods and services available, causes households to quickly spend this money and allow inflation to occur. The following equation illustrates this: Money Supply x Velocity of circulation = Price Level x Total Transactions There are several assumptions in this model, but it is effectively saying more money leads to more spending, which leads to higher prices in accordance with demand-pull inflation. Money supply is dangerous in that if not regulated properly, it can cause hyperinflation. However, most governments have this under control. In conclusion, inflation is caused by a combination of demand and supply side factors, and controlling it must take into account effective demand-side regulation in line with productive capacity in the short-run, along with a steady growth in the supply side using supply-side policies so that growth does not result in accelerating prices. Tight monetary policy, increases in technology and innovation, low global inflation from increased competition and a strong exchange rate, among other things, have all contributed to low UK inflation over the past 15 years. These are evidently both demand and supply related reasons. ...read more.

This essay responds to the question superbly, having a strong understanding of the different causes. I particularly liked the awareness that there are theories of inflation, rather than causes which are set in stone. This is a great skill to ...

This essay responds to the question superbly, having a strong understanding of the different causes. I particularly liked the awareness that there are theories of inflation, rather than causes which are set in stone. This is a great skill to have in economics, as it shows an understanding of its relevance as a social science well beyond A-Level. Although the essay doesnÃ¢â‚¬â„¢t explicitly ask for policies to reduce inflation, the essay poses a justified judgement to what can be done. I always like when essays go further to incorporate other ideas. This is a great way to revise, as it means you have all the ideas regardless of the question, and can then focus your essay for the exam.

The analysis in this essay is strong, showing a strong understanding of concepts. I liked how the essay talks about Ã¢â‚¬Å“in the short run, aggregate supply is inelasticÃ¢â‚¬Â thus causing demand-pull inflation. Being able to incorporate technical terms such as elasticity is a great way to gain marks! The discussion of cost-push inflation is particularly strong, with a reference to the Phillips curve being made. This is beyond the A-Level syllabus and will gain credit for analysis. I wouldÃ¢â‚¬â„¢ve liked to have seen some diagrammatical analysis, as this is the easiest way to demonstrate an understanding of inflation. A simple shift of aggregate demand to show demand pull, and a shift in aggregate supply to show cost push. Whenever I talk about inflation, I always talk about the wage-price spiral, as this shows a strong understanding of mechanisms. This was well explained here!

The structure here is strong, with the introduction placing in some background knowledge of how inflation is measured and why it is relevant. I like this, as it shows to the examiner immediately that you have a strong understanding. If this essay was a discussion, however, I would normally argue you should keep your introduction short and focussed. Technical terms are used throughout, and the style makes for a convincing argument. This is because each step follows on from the last, showing a clear progression in the argument. I just wanted to see more diagrams!