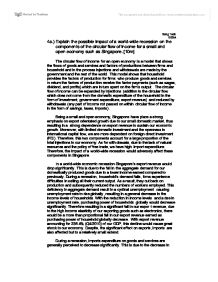 Explain the possible impact of a world-wide recession on the components of the circular flow of income for a small and open economy such as Singapore.

This deficiency in aggregate demand result in a cyclical unemployment causing unemployment rate to rise globally, resulting in a general decrease in the income levels of households. With the reduction in income levels and a rise in unemployment rate, purchasing power of households globally would decrease significantly. Therefore resulting in a significant fall in our export revenue, due to the high income elasticity of our exporting goods such as electronics, there would be a more than proportional fall in our export revenue earned as purchasing power of household globally decrease. With export revenue accounting for 236.4% (Q4/2010) of our GDP, this decline would cause great shock to our economy. Despite, the significant effect on exports, imports are also affected but to a relatively small extend. During a recession, imports expenditure on goods and services are generally perceived to decrease significantly. This is due to the decrease in aggregate demand due to the decrease in purchasing power as mentioned above. ...read more.

This is due to the decline in revenue that the firms earned from the reduction in the sales of their product due to decreased in the demand for their good and services as households now have a lower purchasing power. This cause the firm's profits to drop as compared to previously resulting in a reduction in the demand to invest as they now have less profits, hence less funds available for investment purpose and therefore less willing to invest. Furthermore, with an economic recession, the future expected returns is not stable and the investment takes time to see the result, therefore firms might find it risky to invest during that period of time and hence decide not to do so. Moreover, most firms would focus on surviving in the market in the short-run by operating at the level where marginal revenue equals to marginal cost or above. Therefore, this results in a significant decrease in the level of FDI injected into our economy affecting our economic growth as we are heavily dependent on it. In conclusion, Singapore's injections would decrease significantly as compared to the mild decrease in withdrawals and this would adversely affect its internal economy. ...read more.

This essay engages with the question superbly. There is a good understanding of the circular flow of income from the introduction, however I would've liked to see a diagram to display this knowledge further. I particularly liked how they looked ...

This essay engages with the question superbly. There is a good understanding of the circular flow of income from the introduction, however I would've liked to see a diagram to display this knowledge further. I particularly liked how they looked at Singapore in context, noting a heavy reliance on export-led growth. Throughout the essay, the impacts of a recession are made clear, and the steps to how this affects the circular flow of income flow well. Being able to show a mechanism clearly in economics will gain credit, and this essay does it well.

The analysis in this essay is strong. There is a clear discussion of a number of leakages and injections. I particularly liked the discussion of elasticities within the arguments, as this is a higher level concept, and it shows how the question has been applied to Singapore. Being able to tweak a discussion based on the dynamics of the economy in context is a great skill, and this essay does it well by using GDP figures, etc. There are always marks for application in economics essays, so this essay is a good example of how to pick them up. In my opinion, this essay should've discussed the multiplier. A small decrease in investment will result in a larger decrease in national income, for example. So, a discussion of a vicious cycle would've been relevant here. This could've been used in the conclusion to make it slightly stronger.

The structure of this essay is strong, having a clear introduction which defines and explains the circular flow of income, and a conclusion which summarises the essay points. What I particularly liked was the first sentence of each paragraph in this essay. They are all short and concise, giving a clear signpost to what is going to be explained. This allows examiners to allocate marks easily, and forces you to stay on focus when writing! The style here is strong, with phrases such as "therefore" and "hence" showing a clear understanding of the mechanism involved. This makes for a convincing argument, and when used with technical terms, a very strong economics essay.