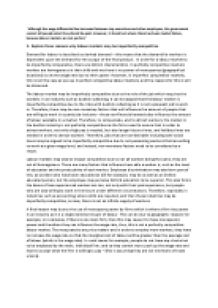 Explain three reasons why labour markets may be imperfectly competitive

However, this can be done without government intervention, but the key to this, is to ensure that the lowest paid workers can still earn a living wage and this is where government invention may be required in the market in order to decide wage rates through enforcing minimum wages only in certain industries. Wage rates are usually decided through the use of the labour market, and wages are therefore payments by firms to their workers in order for a job to be completed. Wages therefore act as a necessity for markets in order to respond to changes in market demand for a particular product. For example, if the demand for a product rises, as labour is an example of derived demand (where the demand for workers is derived from the demand of the final output), then this will cause an outward shift in demand for this. Therefore, as shown below, the wage rate will increase from W1 to W2, as in order to attract more workers into this industry, the higher wage rates act as an incentive for workers leading to an increased quantity of employment shown from Q1 to Q2. Wage differentials are therefore important in the economy as the difference in wages allow people to choose what education path they want to go down into in their career. Not everyone is homogenous, and some people may not be suited for a particular industry where there is high pressure and a high education level is required. ...read more.

This can be shown below: Also, the argument about how higher average wages may improve staff moral and if the workers are earning higher wages, employees may seek to gain higher returns so they may invest in training thus improving productivity, there is the key element of how likely this is going to occur, especially in the UK economy. For example, most manufacturing has moved offshore to China, where wages are up to 4% lower than in the UK and so perhaps we will not see as higher shift in the marginal revenue productivity as we would have hoped, simply due to low manufacturing in the UK. In conclusion, it is important to ensure there are wage differentials between different occupations to reward those who are required to train for difficult jobs. Yet, as we have seen, perhaps non-monetary factors are also needed in addition to monetary factors. However, even if the minimum wage is supposed to reduce inequality, we still see there to be over a £1 difference between the living wage and the minimum wage, as the minimum wage has not increased as much as inflation and other increased costs (especially in London where living is much more expensive than in the North). Perhaps, one also needs to consider the type of wage differentials, as we have discussed mainly occupational differences, but gender inequality also occurs and this has resulted in government legislation to reduce the gender pay gap that is seen in the UK. Therefore, in the case of gender wage differentials, it can be argued that government do have a role to play to reduce this negative discrimination seen. ...read more.