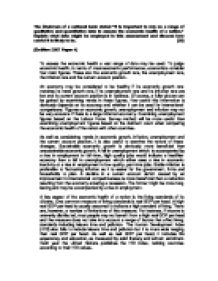 The Chairman of a national bank stated "it is important to rely on a range of qualitative and quantitative data to assess the economic health of a nation." Explain what data might be employed in this assessment and discuss how useful it is likely to be. (25) (Oct/Nov 2007 Paper 4) To assess the economic health a vast range of data may be used. To judge economic health, in terms of macroeconomic performance, economists consider four main figures. These are: the economic growth rate, the unemployment rate, the inflation rate and the current account position. An economy may be considered to be healthy if its economic growth rate matches its trend growth rate, if its unemployment rate and its inflation rate are low and its current account position is in balance. ...read more.

Stable inflation is preferable to fluctuating inflation as it is easier for the government, firms and households to plan. A decline in a current account deficit caused by an improvement in international competitiveness is more beneficial than a reduction resulting from the economy entering a recession. The former might be more long lasting and may be accompanied by a rise in employment. A key aspect of the economic health of a nation is the living standards of its citizens. One common measure of living standards is real GDP per head. A high real GDP per head is usually assumed to indicate a high standard of living. There are, however, a number of limitations of this measure. For instance, if income is unevenly distributed, most people may not benefit from a high real GDP per head and the measure does not take into account a range of factors that affect living standards including leisure time and pollution. ...read more.

If an economy is doing well, consumer demand is likely to be increasing. This may lead to higher profit levels which, in turn, may increase net investment. A buoyant economy would also tend to encourage foreign firms to set up in the country and to attract foreign workers to move to the country. Of course, it is possible that rising profit levels may be the result of increased market concentration which in the long term may disadvantage consumers. Increasing FDI may be more the result of a downturn in the countries the firms are coming from and although a desire for improved living standards is the main motive for workers to emigrate, there other reasons including political persecution. There is no lack of data that can be employed to assess the economic health of a nation. Care, however, has to be taken in selecting and interpreting the information used. ...read more.