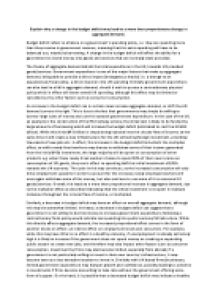 Explain why a change in the budget deficit may lead to a more than proportionate change in aggregate demand.

﻿Explain why a change in the budget deficit may lead to a more than proportionate change in aggregate demand. Budget deficit refers to a failure in a government?s spending policy, i.e. they are spending more than they receive in government revenue, meaning that this extra spending will have to be balanced out, mostly by borrowing. A change in the budget deficit will affect the ability for a government to invest money into goods and services that are normally state provided. The theory of aggregate demand details the total expenditure in the UK, towards UK provided goods/services. Government expenditure is one of the major factors that make up aggregate demand, being able to provide a direct impact (endogenous shocks) i.e. a change to an expansionary fiscal policy, a direct injection into UK spending. Similarly government expenditure can also lead to a fall in aggregate demand, should it wish to pursue a contractionary physical policy which in effect will lower overall UK spending, although this effect may be limited or cancelled out by other factors such as consumer consumption. ...read more.

Overall, this leads to a more than proportional increase in aggregate demand, due to the multiplier effect as described indicating that the initial investment is re-spent in multiple instances throughout the circular flow of income, or multiplied. Similarly, a decrease in budget deficit may have an effect on overall aggregate demand, although this may be somewhat limited. In theory, a decrease in budget deficit can suggest that a government is not willing to borrow money to increase government expenditure; following a contractionary fiscal policy would indicate less spending into public services/infrastructure. While this directly affects aggregate demand, the increased proportional effect comes in the form of another knock-on effect: an indirect effect on employment levels and consumers. For example, while this may have little to no effect in a healthy economy, if unemployment is already extremely high it is likely to increase if the government does not spend money on creating or expanding public sectors to create new jobs, and therefore may also impact other factors such as consumer consumption. ...read more.

However it must also be noted that an increased budget deficit does not necessarily indicate that a government is choosing to use the borrowed money towards expenditure into UK infrastructure/the public sector, and even if the government chooses to do so the move is not always universally popular, as in the case of HS2 which was met with strong criticism and possibly will deter foreign investments if it does not prove to be popular. The multiplier effect only assumes that all government expenditure is positive, when this is not necessarily the case. A decrease in budget deficit can also suggest two factors. While directly affected aggregate demand as another endogenous shock, the knock-on effects can include bolstered consumer and business confidence, or possibly the opposite depending on the situation. In either case there will be a limited multiplier effect that will cause a downwards shift in the demand curve, although arguably this will have little effect except for the initial direct hit to the UK aggregate demand as a whole as it simply assumes that the state of an economy is extremely healthy, or unhealthy. ...read more.