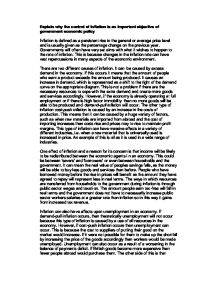 Explain why the control of inflation is an important objective of government economic policy.

Explain why the control of inflation is an important objective of government economic policy Inflation is defined as a persistent rise in the general or average price level and is usually given as the percentage change on the previous year. Governments will often have very set aims with what it wishes to happen to the rate of inflation. This is because changes in the inflation rate can have vast repercussions in many aspects of the economic environment. There are two different causes of inflation. It can be caused by excess demand in the economy. If this occurs it means that the amount of people who want a product exceeds the amount being produced. ...read more.

This type of inflation can have massive effects in a variety of different industries, i.e. when a raw material that is universally used is increased in price. An example of this is oil as it is used in a wide range of industries. One effect of inflation and a reason for its concern is that income will be likely to be redistributed between the economic agents in an economy. This could be between 'savers' and 'borrowers' or even between households and the government. It can mean the real value of peoples savings falls, as the money will be able to buy less goods and services than before. People who have borrowed money before the rise in prices will benefit as the amount they have agreed to repay will represent less in real terms. ...read more.

Unemployment can also occur as a result of a worsening in the balance of payments deficit. If British goods become more expensive then fewer people abroad would purchase them. The other side of this is that British people would also purchase more foreign-made goods. This would cause unemployment to increase and the Balance of payments to worsen. It is of great importance to the government to control inflation, as the effects of large rises in the price level can be very damaging to both the economy and the people within it. The government will still want some degree of inflation as the people who usually gain from it 'borrowers', people with mortgages and indeed the Government. The main people who suffer most due to inflation are lenders, people on fixed incomes and exporting firms and industries. ...read more.