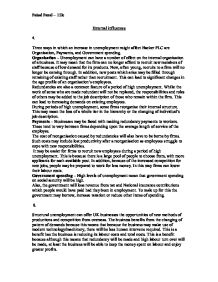 External influences - Three ways in which an increase in unemployment might affect Hacker PLC are Organisation, Payments, and Government spending.

External influences 4. Three ways in which an increase in unemployment might affect Hacker PLC are Organisation, Payments, and Government spending. Organisation - Unemployment can have a number of effect on the internal organisation of a business. It may mean that the firm can no longer afford to recruit new members of staff because of low demand for its products. New, often young, recruits to a firm will no longer be coming through. In addition, new posts which arise may be filled through retraining of existing staff rather than recruitment. This can lead to significant changes in the age profile of an organisation's employees. Redundancies are also a common feature of a period of high unemployment. Whilst the work of some who are made redundant will not be replaced, the responsibilities and roles of others may be added to the job description of those who remain within the firm. ...read more.

This is because there is a large pool of people to choose from, with more applicants for each available post. In addition, because of the increased competition for new jobs, people may be prepared to work for less money. In this way firms can lower their labour costs. Government spending - High levels of unemployment mean that government spending on social security will be high. Also, the government will lose revenue from tax and National insurance contributions which people would have paid had they been in employment. To male up for this the government may borrow, increase taxation or reduce other items of spending. 8. Structural unemployment can offer UK businesses the opportunities of new methods of productions and competition from overseas. ...read more.

15. The likely implications for the government trying to reduce the unemployment are that in Cyclical employment the business may suffer from the falling sales. In the short term, the businesses may be able to add any surplus production to stocks. Alternatively, businesses may seek new market, perhaps overseas. However, not all businesses may suffer from the changes in unemployment, whilst suppliers of luxury products could suffer substantial reduction in sales. Secondly, in structural unemployment the effects on the businesses can be severe because it's often highly localised and very persistent. If there is need to a reduce output, then rationalisation and redundancy might follow and factories and offices may be closed. Research and development plans may be abandoned or postponed as firms seek to reduce their costs to match their reduced revenues. The predicted fall in the level of demand may encourage the firms to diversify. Faisal Fazal - 12le ...read more.