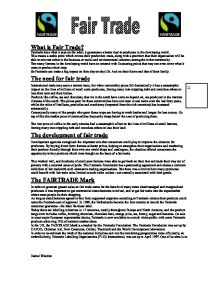 What is Fair Trade? Fairtrade does what it says on the label; it guarantees a better deal to producers in the developing world. This means a stable price which covers their production costs, along with a premium that their organisation will be able to reinvest either in the business or social and environmental schemes among the wider community. Too many farmers in the developing world have to contend with fluctuating prices that may not even cover what it costs to produce their crop. So Fairtrade can make a big impact on their day-to-day life. And on their future and that of their family. The need for fair trade International trade may seem a remote issue, but when commodity prices fall dramatically it has a catastrophic impact on the lives of millions of small scale producers, forcing many into crippling debt and countless others to lose their land and their homes. ...read more.

world shops and catalogues, the charities offered consumers the opportunity to buy products which were bought on the basis of a fair trade. This worked well, and hundreds of small poor farmers were able to get back on their feet and trade their way out of poverty with a renewed sense of pride. The Fairtrade Foundation has a partnership agreement and shares a common definition of fair tradewith such alternative trading organisations. But there was a limit to how many producers could benefit with fair trade sales limited to such niche outlets - not normally associated with food goods. The FAIRTRADE Mark In order to generate greater sales on fair trade terms for the benefit of many more disadvantaged and marginalised producers it was important to get commercial manufacturers involved, and to get fair trade into the supermarket where most people do their shopping. ...read more.

International, was set up in April 1997. One of its aims is to see the introduction of a single international Fairtrade label. The national initiatives retain responsibility for marketing and promoting Fairtrade in their respective countries. A table to show the fair trade produce, produced in different countries. Cocoa Coffee Fresh fruit and juice Belize Bolivia Dominican Republic Ghana Cameroon Colombia Costa Rica Dominican Republic Guatemala Haiti Indonesia Mexico Nicaragua Peru Rwanda Tanzania Uganda Papua New Guinea Brazil Costa Rica Cuba Dominican Republic Ecuador Ghana Windward Islands Honey Sugar Tea Chile Mexico Uruguay Malawi Paraguay India Kenya Sri Lanka Tanzania Uganda Fair Trade is involved in making sure people in L.E.D.C's make their money from their cash crops or goods without being extorted by their buyers (the big wholesalers). Fair Trade ensures that they receive the money the deserve for their crops. Fair Trade is involved in making sure workers who stitch trainers or footballs are not extorted an work in the right conditions and Fair Trade helps a lot of people all over the world. Daniel Wendon ...read more.