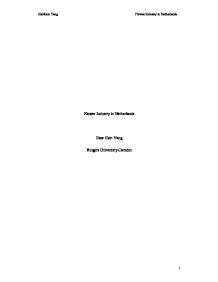 Flower Industry in Netherlands Haw Hsin Yang Rutgers University-Camden A) International Trade * Balance of payments-analyses and implications Netherlanders create a total GDP of �453 billion in 2003 which equals �27,900 per capita. Export and import of goods as % of GDP respectively reached 58% and 68%, and she is the sixth largest exporter and investor in world. A sizable current account surplus is produced by food processing, chemicals, petroleum refining, and electrical machinery. The country continues to be one of the leading European countries for attracting foreign direct investment. Though economic growth slowed considerably in 2001-03, as partly the global economic slowdown, for the four years before recession, annual growth of GDP averaged nearly 4%, which exceeded the EU average. Year 1998 1999 2000 2001 2002 Trade balance Amount Million $ 20430 16034 17519 20913 25754 Current account balance Amount Million $ 13031 12996 4561 8144 9866 Capital and Financial account balance Amount Million $ -15370 -17607 -4341 -8495 -9999 Overall balance Amount Million $ -2339 -4611 220 -351 -133 Source: IMF Financial Statistics Year Book 2003 * Trading relationships The Netherlands has been a leading trading nation for many centuries. Her prosperous and open economy depends heavily on foreign trade. In 1602, the very first international trade company, Dutch East Indian Company, was founded by Netherlanders. Although the Netherlands no longer occupies the governing position it held in the 17th and 18th centuries, her trading position still remains relatively strong. With 0.25% of the world population and a little under 1% of total global production, the Netherlands generates 3.2% of world trade - nearly four times as much as might be expected purely in terms of the size of her economy. Since signing the Treaty of Paris to found ECSC (European Coal and Steel Community), Netherlands has become one of the very beginning member countries of EU. Along with 11 of its EU partners, Netherlands began circulating the euro currency on 1 January 2002. ...read more.

* Breeding industry A number of industrial research groups are working on the Plant Biotechnology. Some breeding companies are domestic, and others have their foreign parent companies. Therefore, they are not only serving local demand but also foreign customers. The main operations of a breeding company here may be breeding plants, trading breeds internationally, and developing new varieties. However, the ability to commercialize those research results is the most crucial competitiveness of further developments in this innovative and dynamic research field. It can be illustrated that the commercialization of research results has been rapidly revolving. First the application of patents in the plant biotechnology in Netherlands has increased rapidly and many universities and institutes are expert at patent applications and have produced a number of high quality patents. Therefore, that the key reason why many foreign companies operate a subsidiary company here because they recognize, consider and use Dutch plant genetic and biotechnological groups as attractive research partners, either through IJVs or direct contract cooperation. Besides these big companies, many incubated start-up companies from universities, institutes are considered more and more as an attractive way to stimulate innovative commercial activities. This will result in the creation of wealth, high quality jobs and innovations for the entire industry in general. For example, the world's largest breeding company, Cebeco Inc., is located in Netherlands and exports its breeds to more than 100 countries over world. * Financial industry The vigorous financial industry in Netherlands plays a vital role in supporting agriculture by offering abundant loans. Due to limited lands available in Netherlands, Netherlanders employ as many modern technologies as possible to make up what they lack. In this way, farmers have to invest in much more capital than traditional farmers in other countries do. Not only that, some banks have excellent connections with related and supporting companies for farmers, such as glasshouse construction companies and breeding companies, and offer relevant consulting services to farmers. ...read more.