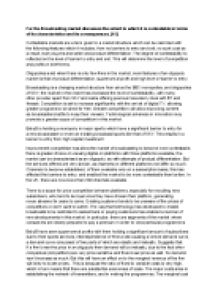 For the Broadcasting market discusses the extent to which it is contestable in terms of its characteristics and its consequences.

﻿For the Broadcasting market discusses the extent to which it is contestable in terms of its characteristics and its consequences. [15] Contestable markets are a term given to a market structure which can be calorized with the following features which it includes, from no barriers to entry and exit, no sunk cost as a result, many buyers and seller and product differentiation. The degree of contestability to reflected on the level of barrier to entry and exit. This will determine the level of competition and profits in brief terms. Oligopolies exist when there is only few firms in the market, main features of an oligopoly market is that of product differentiation, supernormal profit and high level of barrier to entry Broadcasting is a changing market structure from since the BBC monopolies, and oligopolies of SKY, the market in the recent has increased the level of contestability, with many other provider apart from SKY and cable offering premium television, likes with BT and freesat. ...read more.

Existing customer tends to be unaware of the prices of competitors or don?t want to switch. The way that technology has developed to enable broadcasts to be restricted to subscribers or paying customers has enabled a number of new developments in this market. In particular, there are segments of the market where consumers are clearly prepared to pay a premium in order to view particular programmes BskyB have seen supernormal profits with them holding a significant amount of subscribers due to their sports services, interdependence of firms exist causing a kinked demand curve, a demand curve composed of two parts of which are elastic and inelastic. Suggests that if a firm lower the price in an oligopoly then demand will be inelastic, due to the fact other companies (competitors) are very price sensitive and thus lower price as well. So demand won?t increase as much. But this will have an effect on to the marginal revenue of the firm will likely to lower prices. ...read more.

News Corp. Suggested that the broadcasting market is less contestable that it appears, but it may become less contestable and more concentrated in the future, the extent to which television creates and encouraging competition may be seen of low quality shows, danger of market failure if not Ofcom is regulating the market. The broadcasting industry has significantly changed the type of market which it has from once being an oligopoly towards a contestable level. However, contestability may not necessarily result in increased efficiency and economic welfare. This is because, if new firms enter the market, competition may reduce the profitability of the industry. This may leave insufficient funds to finance investments in improving networks, research and development and machinery. Also, firms have a temptation to offer short-term price cuts rather than invest in the long-term future. The consumers may benefit in the short term, but loose out in the long term. One advantage of the system that allowed BSkyB to gain a monopoly in the supply of televised live football and cricket matches is that this brought money into the respective sports, enabling investment in football clubs and cricket. ...read more.