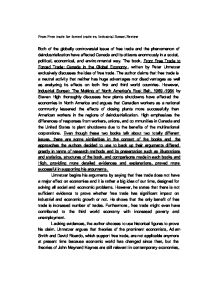 From Free Trade to Forced Trade: Canada in the Global Economy, written by Peter Urmetzer exclusively discusses the idea of free trade. The author claims that free trade is a neutral activity that neither has huge advantages nor disadvantages as well as an

From Free trade for forced trade vs. Industrial Sunset Review Both of the globally controversial issue of free trade and the phenomenon of deindustrialization have affected Canada and its citizens enormously in a social, political, economical, and environmental way. The book, From Free Trade to Forced Trade: Canada in the Global Economy, written by Peter Urmetzer exclusively discusses the idea of free trade. The author claims that free trade is a neutral activity that neither has huge advantages nor disadvantages as well as analyzing its effects on both first and third world countries. However, Industrial Sunset: The Making of North America's Rust Belt, 1969-1984 by Steven High thoroughly discusses how plants shutdowns have affected the economies in North America and argues that Canadian workers as a national community lessened the effects of closing plants more successfully than American workers in the regions of deindustrialization. High emphasizes the differences of responses from workers, unions, and communities in Canada and the United States to plant shutdowns due to the benefits of the multinational corporations. Even though these two books talk about two totally different issues, there are some similarities in the content of the books and the approaches the authors decided to use to back ...read more.

Quoting direct words from the interviewees, he emphasizes the fact that displaced workers felt really frightful and that the plants which closed down not only meant losing a working place, but also meant loss of an internal part to the employees. The author continues by noting the newly aroused environmental issues that had affected the industries to eventually relocate or shut down. He stresses out that the executives of multi-national corporations needed to make profits in the world of global competition and as a result, they had decided to employ a strategy of shifting the industrial plants to a place where there are cheaper labour with nice surroundings or closing down the unprofitable plants. By doing so, they gained a reputation of protecting the environment but at the same time, resulting in immense number of unemployment. In the last two chapters, High brings attention of the reader to the trade union's failure to resist plant shutdowns, the shift from manufacturing economy to service economy, foreign competition and concludes by stating that the effectiveness Canadians showed as a national community in mitigating the dreadful effects of deindustrialization were much better than fellow American worker's struggle through this period of time. ...read more.

High specifically analyzed deindustrialization and its effects from American and Canadian perspectives and showed the difference between the countries very effectively. On the other hand, Urmetzer decided to compare the positive and negative sides of free trade, but he could have approached the issue by comparing a country with implementation of the free trade and a third world country not implementing it, to make the comparison more obvious. Lastly, Urmetzer was not successful in proving his main thesis whereas High maintained consistency throughout his book and eventually, proves his argument. The chief purpose of a book is to prove the claimed thesis. In the beginning of the free trade book, Urmetzer argues that free trade is a neutral activity. Nevertheless, he ends the book suggesting that free trade has benefited only the first world countries, not third world countries who are still in debt. Therefore, he visibly made a mistake of not supporting his original thesis at the end of his book. On the contrary, High keeps his arguments throughout the book and gives the reader the impression that he succeeded in proving his idea. This is seen when he explains the effects of plant shutdowns from both Canadian and American experiences in his several chapters of the book. ...read more.