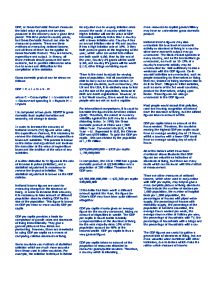 GDP, or Gross Domestic Product measures the total value of goods and services produced in the economy over a given time period. This time period is usually yearly, but Gross Domestic Product can also be measured quarterly. There are three methods of measuring national income, and all three of them can be applied to Gross Domestic Product. They are income, expenditure and output. In theory, all three methods should produce the same outcome, but in practice differences arise due to errors and difficulties in the compilation of the statistics. Gross domestic product can be shown as follows: GDP = C + I + G + X - M where C = Consumption I = Investment G = Government spending X = Exports M = Imports I is composed of two parts. GDFCF is gross domestic fixed capital formation and secondly, net change in stocks. In order to increase the accuracy of National Income (Yn) figures when using the expenditure measure, it is necessary to remove the distorting effect of expenditure taxes and subsidies. ...read more.

There is the need to adjust for varying sizes of population. Not all countries are able to carry out an accurate census. In developed countries, such as Germany, the UK and the USA, it is relatively easy to find out the size of the population, because of birth and death registrations. However, in a 3rd World country, there would be many people who are not on such a register. For international comparisons, it is usual to translate the figures into American dollars ($US). Therefore, the extent of currency volatility against the $US may be a further distorting factor. In 1990, the Gross domestic product of China was 1,769 billion Yuan. Converted into $US, 4.78 Yuan = $1. Expressed in $US, the Chinese GDP was $370 billion. To gain the GDP per capita , this was divided by the population of 1,139 million. $370,000,000,000 = $325 per capita. 1,139,000,000 In comparison, the US in 1990 had a gross domestic product of $5,346 billion and a population of 250 million Therefore the GDP was: $5,546,000,000,000 -= $22,200 per capita 250,000,000 If the dollar had been worth a different amount against the Yuan, the figure for China's GDP may have been quite different altogether. ...read more.

The question isn't stated here, but from what is written I can assume it's similar to "How useful are GDP figures for measuring standard of living?". This essay responds very well to this task, beginning with some basic knowledge of ...

The question isn't stated here, but from what is written I can assume it's similar to "How useful are GDP figures for measuring standard of living?". This essay responds very well to this task, beginning with some basic knowledge of GDP and then assessing it's benefits and limitations. There is plenty of numerical analysis, which is vital in this question as there isn't a natural diagram. I liked how they come to a conclusion suggesting they are useful when combined with other factors, as this shows insight without sitting on the fence. This essay could've gone further by discussing GDP measured with purchasing power parity, or gone into talking about developing countries and whether HDI is more useful.

The analysis here is superb. The definition of GDP is exactly what exam boards want to see, including the keywords of "total output" and "over a defined period of time". There is strong awareness that GDP must be adjusted for inflation, but it was a shame they didn't mention real GDP in this explanation. Whereas, there is a good awareness that the GDP must be shown as a figure based on the population, and then goes to use the technical term "GDP per capita". Being able to use technical terms will show strong understanding and thus gain credit. There is perceptive awareness that GDP per capita is an average, and doesn't take into account what goods and services are outputted. I would've gone on to say that inequality must be looked at, maybe through the Gini coefficient or Lorenz curve. There are numerous points explained here which show the limitations of GDP as a measure, and such there are plenty of places where an examiner can give marks. It doesn't jump to conclusions, but explains each point by clearly showing how each step affects the next. Whilst this may seem simple, too many people miss out steps and this shows a lack of understanding.

The essay has a good structure. I liked how there was a progression from knowledge to analysis and then evaluation, as this is a style examiners like. Economics essays are marked on a number of levels, and such progression allows easy mark allocation. The style is strong and allows for a convincing argument. Spelling, punctuation and grammar are fine.