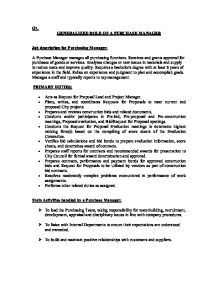 Generalized role of a purchase manager

Q1. GENERALIZED ROLE OF A PURCHASE MANAGER Job description for Purchasing Manager: A Purchase Manager manages all purchasing functions. Receives and grants approval for purchases of goods or services. Analyzes changes or new issues in materials and supply to reduce costs and improve quality. Requires a bachelor's degree with at least 8 years of experience in the field. Relies on experience and judgment to plan and accomplish goals. Manages a staff and typically reports to top management. PRIMARY DUTIES: * Acts as Request for Proposal Lead and Project Manager. * Plans, writes, and coordinates Requests for Proposals to meet current and proposed City projects. * Prepares and reviews construction bids and related documents. * Conducts and/or participates in Pre-bid, Pre-proposal and Pre-construction meetings, Proposal evaluation, and Bid/Request for Proposal openings. * Conducts the Request for Proposal Evaluation meetings to determine highest ranking firm(s) based on the compiling of score sheets of the Evaluation Committee. * Verifies bid calculations and bid bonds to prepare evaluation information, score sheets, and determines award of contracts. * Prepares staff reports for contracts and recommended awards for presentation to City Council for formal award determination and approval. * Prepares contracts, performance and payment bonds for approved construction bids and Request for Proposals to be utilized by vendors as part of construction bid contracts. * Resolves moderately complex problems encountered in performance of work assignments. * Performs other related duties as assigned. Main Activities handled by a Purchase Manager: > To lead the Purchasing Team, taking responsibility for team building, recruitment, development, appraisal and disciplinary issues in line with company procedures. > To liaise with Internal Departments to ensure their expectations are understood and exceeded. > To build and maintain positive relationships with customers and suppliers. > To ensure that purchasing practice are achieved or exceeded. > To measure Purchasing process, propose and implement improvement to the process. > To negotiate price and lead times in accordance with MRP or as agreed in impact reviews and product team delivery milestones. ...read more.

By then, software and IT-related services are expected to employ 2.2 million people. However, as in the past, McKinsey expects Indian firms to account for most of the future growth: only $5 billion in FDI is anticipated to achieve the 2008 projections for IT sector output and exports. The dot-com bust in the U.S. will not affect the Indian IT-sector's growth, which relies mostly on the outsourcing of existing activities rather than on future growth of e-commerce. Even if McKinsey's growth projections for 2008 are met, India's share of the U.S. software market will be only 4.1 percent, although Field observes that, "India enjoys first-to-market advantage and owns anywhere from 80 percent to 95 percent of the U.S. offshore market [for software services]." India's Competitiveness in Software: India has done well in software because that industry makes intensive use of resources in which India enjoys international competitive advantage, while making less intensive use of resources in which India is at a comparative disadvantage. Figure 1, drawing on Porter, depicts India's diamond of competitive advantage in this sector. Software makes intensive use of human capital, and India has several advantages in this regard. First, India produces the second largest annual output of scientists and engineers in the world, behind only the United States. Second, this labor pool is relatively cheap. Third, the English language capability of Indian graduates facilitates interaction and collaboration with programmers in the United States or Europe. In this respect, Indian graduates enjoy a decisive advantage over their Chinese counterparts, who are otherwise nearly as numerous and cost competitive as Indian programmers. A large and sophisticated network of educational institutes supplies the human capital required by the software industry. The Indian Institutes of Technology, which admit one student for every 100 applicants, churn out first-rate graduates, who today are sought out by firms from all over the world. Many of its graduates migrated to the United States for higher education and jobs and form part of the social network that nurtures the Indian software industry. ...read more.

The essence of this 'menu' contains steps such as opening-up of the economy to foreign trade, investment and technology, and to provide MNCs free access to most of the sectors in the economy by lifting all restrictions. It also includes removal of barriers on imports and pursuance of a free trade policy as specified under the WTO (World Trade Organization) agreement. Prior to 1991, FDI in India was limited to 40 per cent of joint ventures, except in a few high-tech areas. Its approval itself was very time consuming and arbitrary. In 1991, the government established a Foreign Investment Promotion Board (FIPB) to provide single-window approval for projects. In 1996, new guidelines were issued extending automatic approval for ventures with up to 51 per cent foreign equity in 13 major industries and adding automatic approval for foreign equity up to 74 per cent in nine industries, predominantly in infrastructure area. In three mining industries, how ever, not more than 50 per cent foreign equity was allowed, while in some limited circumstances, the new regulations permitted even 100 per cent foreign equity. The criteria for FIPB were codified and published for those areas where automatic approval was to be guaranteed. A Foreign Investment Promotion Council (FIPC) was also created that year to further encourage FDI. In January 1997, India opened its $36 billion government securities market to FII's (Foreign Institutional Investors) taking the first step towards selling of government debt in overseas markets. By the end of March 1997, there were 427 FII's operating in India. In 1997, the government announced the goal of increasing FDI inflows to India's to $10 billion a year by the year 2000. As far as tariff rates were concerned, during 1991-96, under the Rao government, they were significantly reduced from an average of 85 per cent to 25 per cent, and practically all the quantitative controls were also rolled back. The rupee was also made convertible on trade account. WESTERN INTERNATIONAL UNIVERSITY NEW DELHI CAMPUS COURSE CODE: INB 643 INDIVIDUAL ASSIGNMENT NO. 1 FACULTY: Ms. SAVITA GAUTAM DATE OF SUBMISSION: SUBMITTED BY: 27TH OCTOBER'2004 NEHA SAXENA ...read more.