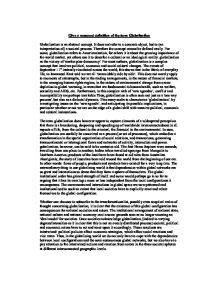 Give a reasoned definition of the term Globalisation

Give a reasoned definition of the term Globalisation Globalisation is an abstract concept. It does not refer to a concrete object, but to (an interpretation of) a societal process. Therefore the concept cannot be defined easily. For some, globalisation refers to Americanisation, for others it is about the growing importance of the world market, yet others use it to describe a cultural or an ideological reality: globalisation as the victory of 'market plus democracy'. For most authors, globalisation is a complex concept that involves political, economic and social-cultural changes. The events of September 11th instantly ricocheted across the world; this shows that in the fabric of everyday life, as Immanuel Kant said we are all 'unavoidably side by side'. This does not merely apply to moments of catastrophe, but in the trading arrangements, in the nature of financial markets, in the emerging human rights regime, in the nature of environmental change from ozone depletion to global warming, in areas that are fundamental to human health, such as welfare, sexuality and AIDS, etc. Furthermore, in this complex web of 'new agendas', conflict and incompatibility are perhaps inevitable Thus; globalisation is often seen not just as a 'one way process', but also as a dialectal dynamic. This essay seeks to characterize 'globalisation', by investigating issues on the 'new agenda', and anticipating its possible implications, in particular whether or not we are on the edge of a global shift with massive political, economic and cultural insinuations. The term globalisation does however appear to capture elements of a widespread perception that there is a broadening, deepening and speeding up of worldwide interconnectedness in all aspects of life, from the cultural to the criminal, the financial to the environmental. In sum, globalisation can usefully be conceived as a process [or set of processes], which embodies a transformation in the spatial organization of social relations, and transactions, generating transcontinental or interregional flows and networks of activity, interaction and power. ...read more.

However, due to globalisation democracies based on territorial nation states began to fail. Although, neo-liberalism can be seen as a cause of globalisation, this does not mean that all the consequences of globalisation therefore fit in the neo-liberalist 'agenda'. To understand and describe globalisation it is not enough to concentrate on the prime movers and the primary phenomena. Not less important for the globalisation dynamic are the consequences and rebound effects. The consequences follow from the fact that the traditional tasks of states are being less fulfilled. This is partly so because states, by acting in accordance with neo-liberal ideology and in adapting to globalisation, have transformed themselves from 'neo-Keynesian guardians of the national public good' to 'neo-liberal guardians of international private capital' respectively of the functioning of a worldwide market system. On the other hand, since the globalisation process has now gained strength of itself, states are also becoming objectively less powerful, less capable of fulfilling traditional 'social' tasks like redistributing welfare and protecting the environment. Furthermore, they are becoming less capable of fulfilling tasks necessary for international capital itself: securing property-rights and ownership, securing social order, fighting criminality, safeguarding peace and so on. State authority is bound to a specific territory. With globalisation, borders become permeable, more and more processes now have a boundary character, some cannot even be localized (they come from 'virtual reality). It is hard, if not impossible for states to regulate these processes that have sometimes quite worrisome effects on national economies, societies and/or politics. States do however; in some instances regain some of their governance-capacity by pooling authority on a higher geographical level, in regional political institutions and in IGOs. Still, we can say that the governance capacity and the will to govern are diminishing. This threatens quality of life in the globalising world in several ways. It particularly causes four 'governance deficits': a social, democratic, ecological and security deficit. ...read more.

The need for the spiritual and supra-natural gains substance within religious movements. The cry for values beyond materialism gains voice within Non Governmental Organizations (NGOs), religious movements and New Social Movements (NSMs). The fear for the foreign materializes within extreme nationalist groups and conservative political parties. It is interesting to see that some of those institutions, strengthened by globalisation, gain governance-capacity beyond the state within globalising society. Contemporary patterns of globalisation mark a new epoch in human affairs. Just as the industrial revolution and the expansion of the West in the nineteenth century defined a new age in world history so today the microchip and the satellite are icons of a new historical conjuncture. Crudely, Globalisation is about: two prime movers: globalisation by and of technology; globalization by and of ideology (American Values). Globalisation is also about two types of consequences: consequences in terms of the democratic, social, environmental and security deficit because of less territorial borders; consequences as rebound effects in terms of attitudes and new institutions rebelling against globalisation (some achieving new governance where democracies fail). This medium: are two dimensional and dialectical. It is about thesis and anti-thesis. Because we cannot yet clearly assess the strength of the prime movers and the consequences, we cannot predict exactly the outcome of the process. The complexities of the process called into life by human technology, human ideology and human conduct are so great that the human mind, despite all the technological support available to it, cannot predict its course. However, these developments pose very significant questions for democracy since the expanding scale of which political and economic power is exercised frequently escapes effective mechanisms of democratic control. Democracy remains rooted in a fixed and bounded territorial conception of political community. Yet globalisation disrupts this neat correspondence between national territory, sovereignty, political space and the democratic political community; it enables power to flow across and over territorial boundaries. If one thing is clear it is this: globalisation is not, as some suggest, narrowing or foreclosing political options and discussion; on the contrary, it is re-illuminating and reinvigorating the contemporary political terrain. ...read more.