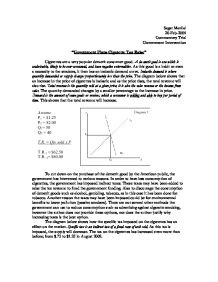 Sagar Manilal 20-Feb-2004 Commentary Trial Government Intervention "Government Plans Cigarette Tax Raise" Cigarettes are a very popular demerit consumer good. A de-merit good is one which is undesirable, likely to be over-consumed, and have negative externalities. As this good is a habit or even a necessity to the smokers, it then has an inelastic demand curve. Inelastic demand is where quantity demanded or supply changes proportionately less than the price. The diagram below shows that an increase in the price of cigarettes is inelastic and as the price rises, the total revenue will also rise. Total revenue is the quantity sold at a given price; it is also the sales revenue or the income from sales. The quantity demanded changes by a smaller percentage to the increase in price. Demand is the amount of some goods or services, which a consumer is willing and able to buy per period of time. This shows that the total revenue will increase. To cut down on the purchase of the demerit good by the American public, the government has intervened to various reasons. ...read more.

(Diagram) These high prices in the market will create alternative means to obtain the cigarettes such as the internet, "Philosophy senior Brad Jackson purchases his cigarettes from Europe via the internet". Since the tax is only applicable in the state of Michigan, it is easy for consumers to evade the tax by purchasing cigarettes in other states or by other means. So the main aim of the increase in tax is to reduce the consumption of the demerit good so that the government has to spend less on health care and medical facilities. As the price in a good in increased other means to overcome the high price such as a black market arises. A black market is where people ignore the government's price and quantity controls and sell at whatever the prices equates illegal demand and supply. Certain websites allow the purchase of cigarettes without tax as Brad has done by ordering from abroad. This shows that the companies in USA have more substitutes. ...read more.

A cost is a payment for factors of production such as land, labor, capital, enterprise. "" We"We know that fewer people smoke as the result of a (price) increase"" is a wrong comment. This is based upon the fact that cigarettes are an inelastic good. An increase in price will only decrease the quantity demanded by a very small percent, so in reality the total revenue will actually rise and not fall. It can thus be concluded that an increase in tax on cigarettes will have some effect of reducing the consumption of cigarettes while at the same time increase revenue for the government. However this may be a long-term process since consumers have an addiction to cigarettes and thus will have to quit. Word count (without quotes) = 750748 Author: Dirk Vanderhart Date: 11th Feb 2004 Title: "Government Plans Cigarette Tax Raise" URL: http://www.statenews.com/article.phtml?pk=22161 [PP1]YOU CAN CRITICIZE HERE CUZ U CAN SAY THAT THE AUTHOR DOESN'T MENTION OTHER WAYS IT CAN CUT DOWN CONSUMPTION SUCH AS DIS-INCENTIVE THINGS LIKE ADVERTISING, AND THAT THE AUTHOR SHOULD JUSTIFY WHY INCREASING TAXES IS THE BEST METHOD ...read more.