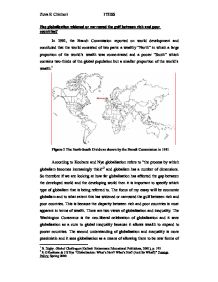 Has globalisation widened or narrowed the gulf between rich and poor countries? In 1981, the Brandt Commission reported on world development and concluded that the world consisted of two parts: a wealthy "North" in which a large proportion of the world's wealth was concentrated and a poorer "South" which contains two-thirds of the global population but a smaller proportion of the world's wealth.1 Figure 1 The North-South Divide as shown by the Brandt Commission in 1981 According to Keohane and Nye globalisation refers to "the process by which globalism becomes increasingly thick"2 and globalism has a number of dimensions. So therefore if we are looking at how far globalisation has affected the gap between the developed world and the developing world then it is important to specify which type of globalism that is being referred to. The focus of my essay will be economic globalism and to what extent this has widened or narrowed the gulf between rich and poor countries. This is because the disparity between rich and poor countries is most apparent in terms of wealth. There are two views of globalisation and inequality. The Washington Consensus is the neo-liberal celebration of globalisation and it sees globalisation as a cure to global inequality because it allows wealth to expand to poorer countries. ...read more.

Also the concentration of investment in these countries has increased by 12 per cent since 1967."5 There are several reasons, which explain why developed countries perform better in the global economy some of which support neo-liberalist views and others, which support socialist views. Firstly international trade has posed challenges for developing countries but yet it is also the key to economic prosperity. Most African nations are dependent on the success of one or two primary commodities for their economy. On the other hand developed nations are able to produce a diverse range of goods and services. Therefore, they do not rely on just one industry or good. "Thus, a trade gap increases inequality because developed countries produce goods and services that fetch much more money than what developing countries produce."6 Also rich countries, particularly the United States of America and countries of the European Union, impose tariffs on goods being imported from poorer countries in order to protect their own domestic markets. What makes countries of the "North" benefit most from globalisation is that they have free markets for exports because many are part of trading blocs, such as the North American Free Trade Association (NAFTA), which allow countries to trade freely without paying tariffs on goods produced within the same bloc. ...read more.

There is more than enough evidence to support the two opposing views of globalisation and inequality. Both views remain valid. Whilst it is true that free markets and liberalisation are crucial to bring countries economic growth it is also true that governments need to be stable enough and must meet certain conditions to embrace globalisation: "Capital moves almost instantaneously into countries with stable governments, progressive economies, open accounting and honest dealing, and out of countries lacking those qualities...Countries wishing to attract capital and to gain the benefits of today's and tomorrow's technology must don the "golden straitjacket", a package of policies including balanced budgets, economic deregulation, openness to investment and trade, and a stable currency."9 On the other hand it is also true that globalisation has enabled new forms of domination to operate. Most evidence however shows that the gap between rich and poor countries is far from narrowing. If anything rich countries are becoming richer whilst many poor countries are remaining poor or becoming poorer. There are exceptions to this and these are countries of South East Asia and some in Central and South America, such as Brazil and Venezuela, whose economies developed a strong manufacturing industrial base in the 1970s. Therefore whether globalisation has widened or narrowed the gap between rich and poor countries it depends on which country is being referred to. ...read more.