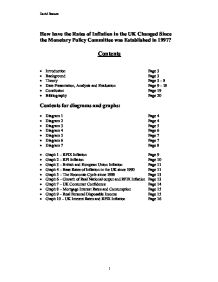 How have the Rates of Inflation in the UK Changed Since the Monetary Policy Committee was Established in 1997?

Interest rates were so high at the beginning of the 1990's because of the Lawson boom. This was a period when inflation reached over 9%. It is known as the Lawson boom because Nigel Lawson was the Chancellor of the Exchequer at the time. He followed policies such as cutting tax rates and interest rates at the same time in an attempt to make the UK people wealthier but in the end he took these measures to far and just caused huge inflation levels. To counter this interest rates were raised, the result of this was a decrease in aggregate demand and an eventual lowering in the inflation figures, and how this happened has already been explained in the theory section, by diagram 1. The early fall in the base rate will have happened as a response to the gradually falling inflation levels and the fact that the UK had now entered a recession and high interest rates will only make the recession worse. This is due to increasing numbers of people would be become unemployed and so they will have problems paying back mortgages. This effect is increased if interest rates are high as some people may already be struggling to pay back their mortgages due to them having to pay far more back a month now that interest rates were 14% as opposed to when they were 4%. It can also be explained by looking the monetarist transmission mechanism, diagram 2, the fall in interest rates will increase the amounts of money supplied. This then leads to an increase in investment which the third diagram shows will increase aggregate demand. The difference in a recession will be that the aggregate supply line will not be vertical in a recession, it will be nearer to horizontal and so look more like this; This shows that prices will only increase a little while income increases far more which will help the economy to move out of the recession. ...read more.

It has carried on the work that the previous government had been doing and has been very successful at it. It has also played an important role in reducing expectation-based inflation and increasing consumer confidence in the market. This is because the MPC is more trusted than the government to do what is best in the long run for keeping inflation down, not what will help them in the short-term. The MPC is probably a more professional group to decide what should happen with the inflation rate. One of the major changes is that the Chairman of the Bank of England does not exert the same amount of influence on the decision that he used to. Between 1994 and 1997 the Chancellor had to do what the Chairman wanted because otherwise he was accused of adjusting it for party political reasons. This ended up giving the Chairman a lot of power. This system is better as he does have the deciding vote if the vote is equally split but it is several experts that have an equal force on deciding what should happen. However the MPC has not had to face any major problems in the economy since they took control, there has not been a recession or any other big challenges. The big question is whether the MPC will be able to help the country out of a recession without sacrificing their role of keeping price stability. Supporters of the MPC will argue that it is having the MPC which has resulted in this lack of a serious challenge, an example being the time following September 11th up until Christmas when there were fears of an oncoming recession but the MPC reacted to stop this. While there have not been vast changes to inflation levels since the MPC took over they have carried out the job they have been asked to do well and so installing them can be described as a success. ...read more.