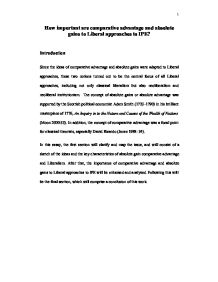 How important are comparative advantage and absolute gainsto Liberal approaches to IPE?

Furthermore, it has been added that comparative advantage is essential for any review of a liberal political economy (loc.cit.). Second, the two notions encourage people to formulate clear-cut definitions of mutual interests. This may be simply cited by any Liberal IPE; for instance, one of the Neoliberal institutionalist perspectives which is germane to an international system, maintaining that the actors must have some mutual interests which can be explained that they must potentially gain from their cooperation (Keohane 1989: 2) is a result of absolute advantage or comparative advantage. Because when one state trades with another, both of them will gain mutual benefits in following the law of absolute gains or comparative advantages. Third, in accordance with the principles of comparative advantage and absolute advantage, the state must locate where it has the greatest comparative or absolute gains so that it can specialize in the commodity that it is more productive than the other. Hence, if countries agree to produce merchandise which they profit from, resources will be less used because the specializing countries know how to use it efficiently. As Liberal IPE is concerned with the scarcity of resources, the exchange of products between countries can help reduce input units for each commodity. It can be deduced that people are able to consume more while the world's resources are less used. ...read more.

III Conclusion To sum up, comparative advantage and absolute gains, which are concerned as one of the central concepts of Liberal schemes, are suggested by Paul Krugman to be the everyday concern of states (Sinclair 2002). Because these two ideas can be easily assimilated and adapted to Liberal IPE approaches. These two notions formulate the idea of economic cooperation between nation-states, help to create more mutual benefits between or among nations and make world's resources efficiently exploited Moreover, comparative advantage and absolute gains give a new perspective to IPE about domestic issues because IPE generally focuses on international matters. Furthermore, as there is no comprehensive world government to cope with monetary stability and open international trading order (Sinclair 2002), the cooperation between nations can assist in preventing the war and unrest which would be caused from the seeking of power by states. And lastly, complex and mulitlayered relations which are now the focus of IPE can also be regarded as a result of comparative advantage and absolute gains. However, liberal ideas under comparative advantage and absolute gains cannot explain the real situations which cheating in cooperation ,many gaps between developed and developing countries, misperception of leaders and inequality of mutual interests have still been major problems. 1 This idea was referred to as the mechanism which intervenes between the motives of the individual and 'end' of society as a whole (Dunne 2001:166). 1 ...read more.