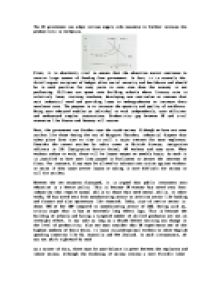 How to Increase the UK's Productivity?

The UK government can adopt various supply side measures to further increase the productivity in workplace. First, it is absolutely vital to ensure that the education sector continues to receive large amount of funding from government. In fact, it is currently the third largest recipient of budget after social security and healthcare and should be in such position for many years to come even when the economy is not performing. Billions are spent onto building schools where literacy rate is relatively lower, training teachers, developing new curriculum or courses that suit industrial need and providing loans to undergraduates to increase their enrolment rate. The purpose is to increase the quantity and quality of workforce. ...read more.

When workers refuse to work, there will be lesser output on monthly basis. As such it is justified to have more laws passed in Parliament to secure the interest of firms. For instance, firms must be allowed to take stricter action against workers or union if they cause severe losses or making it more difficult for unions to call for strikes. Between the two measures discussed, it is argued that public investment onto education is a better policy. This is because UK economy has moved away from industries that require manual skills to those that need mental skills. In other words, UK has moved away from manufacturing sector to services sector like banking and finance and also quaternary like research. ...read more.

In such circumstance, AS may not shift rightward by much As a matter of fact, there must be some balance in power between the employers and labour unions. Although the weakening of unions creates a more flexible labour market (easy to hire and fire without negotiation with trade union) and lower down the costs of production, some firms might abuse the power given. For instance, workers in certain industries may be underpaid or in some circumstance retrenched without any good reason and justified compensation. In some cases, employers may freeze wages of workers for their own good such as taking home fat bonuses. Furthermore, it is already difficult to organise a strike due to the structure of economy. Workers in services sectors, say a bank are not as clustered and large in numbers like those in factories . My be offset by high interest rates or high oil prices/ difficulty to assess productivity ...read more.