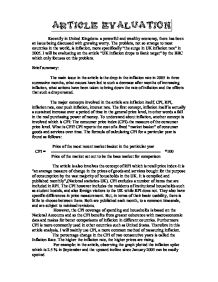 I will be evaluating on the article &quot;UK inflation drops to Bank target&quot; by the BBC which only focuses on this problem. Brief summary: The main issue in the article

Recently in United Kingdom- a powerful and wealthy economy, there has been an issue being discussed with growing worry. The problem, not so strange to most countries in the world, is inflation, more specifically "the surge in UK inflation rate" in 2005. I will be evaluating on the article "UK inflation drops to Bank target" by the BBC which only focuses on this problem. Brief summary: The main issue in the article is the drop in the inflation rate in 2005 in three successive months, what causes have led to such a decrease after months of increasing inflation, what actions have been taken to bring down the rate of inflation and the effects that such a drop created. The major concepts involved in the article are inflation itself, CPI, RPI, inflation rate, cost push inflation, interest rate. The first concept, inflation itself is actually a sustained increase over a period of time in the general price level, in other words a fall in the real purchasing power of money. To understand about inflation, another concept is involved which is CPI: The consumer price index (CPI)-the measure of the consumer price level. What is CPI? CPI reports the cost of a fixed "market basket" of consumer goods and services over time. The formula of calculating CPI for a particular year is found as follows: Price of the most recent market basket in the particular year CPI = *100 Price of the market set out to be the base market for comparison The article is also involves the concept of RPI which is retail price index-It is ...read more.

As a result, the economy's supply of goods and services in the short run declines and the price level increases, causing inflation. The facts stated mentioned here linked neatly with the concept. The article says that decrease in fuel costs; transport costs and lubricant costs have the main contribution to the decrease in inflation rate. These factors helping decrease inflation may not necessarily mean that they are the ones pushing up the inflation rate but indeed rise in fuels costs, or rise in prices of raw materials in economical terms, have normally been the causes of inflation in many countries in the world. Fuel is used in transport for every single commodity, used as a material in production activities of countless goods... Rise in fuels evidently will lead to rises in per-unit production costs of most goods therefore lead to inflation. Checking again on previous articles, I found out that it is indeed fuel prices that hit UK inflation. "The increase in inflation in August was primarily due to higher prices for fuel and some food items" Howard Archer, Global Insight, 13 September 2005. Therefore decrease in fuel costs, transport costs and lubricant costs- causes of inflation no longer exist, helping reduce the effects of the causes of inflation. Furthermore British men have taken actions to combat with inflation "...retailers also helped to restrain inflation by cutting prices of goods...", "...manufacturers were struggling to pass on higher raw material costs to customers, deciding to cut their profits instead...".By cutting the price of products and cutting benefits, retailers help reducing the rising prices of products but without ...read more.

Moreover, the article is last updated on Tuesday, 17 January 2006, 10:28 GMT. It is the most recent article on this particularly issue. Purpose/ motive: The author only portrays perspectives when he is discussing about whether the Bank of England should offer a rate cut in the next months. He states ideas and thoughts from the experts, the economists' points of view and the clear implication of the Bank of England point of view through what the economist said. "The UK is over the recent inflation spike and over the coming months, inflation should be dipping below 2.0%. By the MPC's own monetary policy logic, that should mean they must cut rates again," Bear Stearns economist David Brown said. "This [CPI data] very much keeps the door open for an interest rate cut in February, although the Bank of England may still prefer to wait while it monitors the strength of consumer spending and wage settlement levels early in 2006," said Howard Archer, chief UK economist at Global Insight. Tone of the article: The tone is neutral. The author mainly reports, reaches quite sound conclusion and merely states others' points of view on the rate cut. Facts/ Opinions: the source contains mainly facts and a few opinions. So it will be useful if we need statistical data and analysis as it has the most recent statistics. But it is not really thought-provoking apart from the issue of the interest rate cut which can lead to some discussions. ...read more.

***
This essay does little beyond pointing out some of the main points of the article. It confuses falling inflation with falling prices.