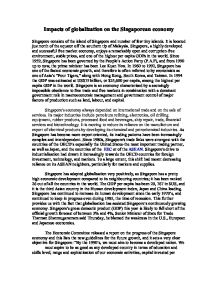 Impacts of globalization on the Singaporean economy

Impacts of globalization on the Singaporean economy Singapore consists of the island of Singapore and number of few tiny islands. It is located just north of the equator off the southern tip of Malaysia. Singapore, a highly developed and successful free market economy, enjoys a remarkably open and corruption-free environment, stable prices, and one of the highest per capita GDPs in the world. Since 1959, Singapore has been governed by the People's Action Party (P.A.P), and from 1990 up to now, the prime minister has been Lee Kuan Yew. In 1960 to 1992, Singapore has one of the fastest economic growth, and therefore is often referred to by economists as one of Asia's "Four Tigers," along with Hong Kong, South Korea, and Taiwan. In 1994 the GDP was estimated at US$75 billion, or $25,600 per capita, among the highest per capita GDP in the world. Singapore is an economy characterised by a seemingly impossible obedience to free trade and free markets in combination with a dominant government role in macroeconomic management and government control of major factors of production such as land, labour, and capital. ...read more.

Singapore's gross domestic product (GDP) this year is likely to fall short of the official growth forecast of between 3% and 4%, Senior Minister of State for Trade Tharman Shanmugaratnam said Thursday, he blamed the weakness in the U.S., European and Japanese economies. The Economic Committee released a report on the progress of the Singapore economy and this lists the new guidelines for the future growth, and it sets a very clear objective for Singapore: "By the 1990's, we must aim to become a developed nation. We must aspire to be as good as any developed country in terms of education and skills level, range and sophistication of our economic activities, capital invested per worker and productivity per worker. But Singapore must be developed economy with margin of advantage. WE must offer the opportunity for a higher rate of return, and a more conductive environment for business, than the OECD countries." The reliance on U.S has lead to some problems as Singaporean officials often stated that "A 1 percent drop in the United States economy had a 1.4 percent effect on Singapore's GNP", and the fact that the economy heavily depends on exports. ...read more.

was showed as an economic blueprint to guide Singapore's progress in the next 20 or 30 years. Under the plan, Singapore would be geared towards becoming a centre of high-tech manufacturing industries and an international business center. Envisioning their key goal, "to achieve the economic status of an advanced developed economy". The government hopes to establish a new growth path that will be less vulnerable to the external business cycle than the current export-led model but is unlikely to abandon efforts to establish Singapore as Southeast Asia's financial and high-tech center. They are among the eight strategic thrusts in the Strategic Economic Plan (SEP). Maintenance of Singapore's international competitiveness; enhancement of its human resources; expansion of teamwork among labour, business and the Government; building up of an international outlook in its firms and people; nurturing an innovation culture; and reducing economic vulnerability, which led to a recession just back in 1985. Overall, globalistaion has had a quite positive effect on Singapore, a country that had poor resources and much untrained workforce, globalisation and the successful strategies have turned this over to a country with high level of trade and investment, with a literacy of 92%. ...read more.