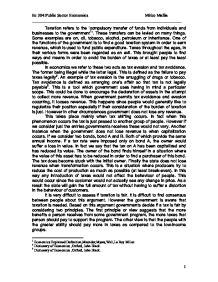 In economics we refer to these two acts as tax evasion and tax avoidance. The former being illegal while the latter legal.

Taxation refers to the 'compulsory transfer of funds from individuals and businesses to the government1'. These transfers can be levied on many things. Some examples are on, oil, tobacco, alcohol, petroleum or inheritance. One of the functions of the government is to find a good taxation system in order to earn revenue, which is used to fund public expenditure. Taxes throughout the ages, in their various forms were been regarded as an evil. This brought people to find ways and means in order to avoid the burden of taxes or at least pay the least possible. In economics we refer to these two acts as tax evasion and tax avoidance. The former being illegal while the latter legal. This is defined as the failure to pay taxes legally2. An example of tax evasion is the smuggling of drugs or tobacco. Tax avoidance is defined as arranging one's affair so that tax is not legally payable3. This is a tool which government uses having in mind a particular scope. This could be done to encourage the declaration of assets in the attempt to collect more revenue. When government permits tax avoidance and evasion occurring, it looses revenue. This happens since people would generally like to regularize their position especially if their consideration of the burden of taxation is just. However in other circumstances government does not lose any revenue. This takes place mainly when tax shifting occurs. In fact when this phenomenon occurs the tax is just passed to another group of people. However if we consider just the entries governments receives these would not vary. Another instance when the government does not lose revenue is when capitalization occurs. If we consider two bonds, bond A and B. Both of which provide the same annual income. If a tax rate were imposed only on bond A, the owner would suffer a loss in value. ...read more.

Now that the sales tax is introduced they would ask for LM 5(point B). This is done so that the sellers would not be influenced by the tax that they are now required by law, to give to the state. Any point on S2 will be LM 1 greater than the equivalent point on S1. We can see from the diagram that the equilibrium has moved from E1 to E2. Price moves upwards from Lm 3 to Lm 3.20. In this case buyers burden is limited to 20 cents of the burden while sellers would have to pay the remaining 80 cents left imposed by the state. We should not forget that the entire Lm 1 goes to the state. This means that the seller would receive LM 2.20. It is clear that in the diagram buyers bear a lighter share of the burden. This takes place because of the responsiveness of consumers to changes in prices. In economics we refer to this phenomenon as elasticity, In fact in this case we can say that demand is more elastic than supply. This could mean that the good we took into consideration is not a necessity good and therefore not inelastic. A small change in price will affect the demand of the consumers. This will hinder producer to pass or shift the burden of the sales tax to the public. If we look at the following diagram the opposite takes place. As we see here the supply is more elastic than demand. Hence, this means that the sellers are more responsive to changes in price. In this case the sellers bear a lighter burden than before. This diagram once more reproduces the demand and supply of people for a particular good. As we see from the diagram the equilibrium moves from E1 to E2. In this case as the arrows show that the consumer bear the 80 cents increase in tax whilst the producer just the 20 cents. ...read more.

Till now we have examined situations where, the imperfections of the market suppliers manages to push forward to consumers the burden of tax. Another possibility could arise. This is when the burden is passed "backward" to the wage earner through the reduction in the wage rate. Many times we find situations where the labour market is weak and it finds itself faced with a monopsonistic employers. In this situation the wage rate may be set below the value of labour's marginal product. In this situation we find that employers are not obliged to exploit their position before the introduction of the tax. However with this introduction, employers could utilize their market powers more fully. The end result would be the tax burden being passed to the labour. When labour is in a strong position a similar situation may result. In this case wage rates are set in collective agreements. It could be that unions when agreeing on wages may allow for the profitability of the firm. The aim of the union could be to bring some of the profits of the firm to wage earners and leave the firm with what is considered to be reasonable profits. Since this depends on corporate profits after tax, an increase in the profits may bring a reduction in wage demands. Once more, part of the increase in tax may again be passed backward to the wage earner. To sum up, it is clear that tax shifting and tax incidence of a tax varies greatly, just by changing the context of the tax. Each and every tax has its own characteristics. According to these characteristics, taxation 'attacks' different categories of people. Finally we have to say that tax shifting is one of the characteristics of taxes in general. Whenever a tax is introduced people will try to shift its burden to someone else. This will bring the burden of taxes to different categories of people. It is thus important for the government to review taxation on a regular basis to assess if the intended fairness of a particular tax is still present. ...read more.