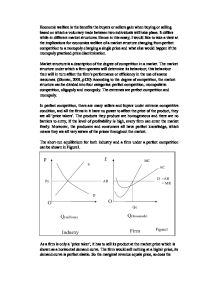 In this essay, I would like to take a view at the implications for economics welfare of a market structure changing from perfect competition to a monopoly charging a single price and what else would happen if the monopoly practiced price discrimination.

Economic welfare is the benefits the buyers or sellers gain when buying or selling based on which a voluntary trade between two individuals will take place. It differs while in different market structures. Hence in this essay, I would like to take a view at the implications for economics welfare of a market structure changing from perfect competition to a monopoly charging a single price and what else would happen if the monopoly practiced price discrimination. Market structure is a description of the degree of competition in a market. The market structure under which a firm operates will determine its behaviour; this behaviour then will in turn affect the firm's performance or efficiency in the use of scarce resources. (Sloman, 2001, p120) According to the degree of competition, the market structure can be divided into four categories: perfect competition, monopolistic competition, oligopoly and monopoly. The extremes are perfect competition and monopoly. In perfect competition, there are many sellers and buyers under extreme competitive condition, and all the firms in it have no power to affect the price of the product, they are all 'price takers'. The products they produce are homogeneous and there are no barriers to entry, if the level of profitability is high, every firm can enter the market freely. ...read more.

The firms in perfect competition are too small, they have to struggle for survival and therefore have no additional resources to spend on research and development. The result is that their technology of production always be backward. But monopolist does not need to be too worried about its survival, so it could spend a lot on research and development to increase its productive efficiency. Moreover, the situations above are all under the condition of that the firms charge a single price, a monopolist could maximize its profit by applying perfect price discrimination. This refers to charging different prices for different units of the same goods or service. Firms always try to click up consumer surplus. According to Figure8, if the monopolist can apply perfect price discrimination by selling each unit at the maximum price the consumers are willing to pay, the producer surplus is shaped tri-angle ABC, and the consumer surplus is all converted into producer surplus, but the economic welfare equaling the producer surplus does not decrease. To sum briefly, as a general rule, the perfect competition could make a greater economic welfare,, but in some cases, monopoly could be more efficient by applying its advantages well. To some extent, the amount of economic welfare is contingent. ...read more.