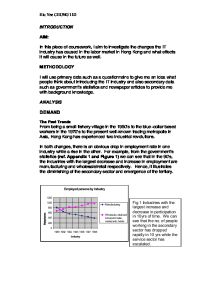 In this piece of coursework, I aim to investigate the changes the IT industry has caused in the labor market in Hong Kong and what effects it will cause in the future as well.

INTRODUCTION AIM: In this piece of coursework, I aim to investigate the changes the IT industry has caused in the labor market in Hong Kong and what effects it will cause in the future as well. METHODOLOGY I will use primary data such as a questionnaire to give me an idea what people think about introducing the IT industry and also secondary data such as government's statistics and newspaper articles to provide me with background knowledge. ANALYSIS DEMAND The Past Trends From being a small fishery village in the 1950's to the blue-collar based workers in the 1970's to the present well-known trading metropolis in Asia, Hong Kong has experienced two industrial revolutions. In both changes, there is an obvious drop in employment rate in one industry while a rise in the other. For example, from the government's statistics (ref. Appendix 1 and Figure 1) we can see that in the 90's, the industries with the largest decrease and increase in employment are manufacturing and wholesale/retail respectively. Hence, it illustrates the diminishing of the secondary sector and emergence of the tertiary. Hence we can see that at present, the secondary sector is disappearing and part of the reason is because since technology is capable of replacing workers, the demand for manual labor has decreased. ...read more.

The workers of Hong Kong have become more and more demanding because education has improved massively and they are more aware of the rights they own. From fig 3, we can see that as the supply of labor increases, the wage rates decrease hence labor is a lot cheaper in the Mainland China, (ref. Appendix 3) so employers which own factories have turned to locate their plants in the mainland. China is less developed so many of the workers demand a lot less and are willing to work harder even in drastic working environments hence for the same job, there is a larger supply of workers in the mainland than it is in Hong Kong. SUPPLY OF LABOUR AND HOW IT NORMALLY WORKS. Also, since the supply for labor bends backwards at some wage level, this means that at some point, a worker will be satisfied with his wage level and refuse to work anymore. This backward bending curve is related to the standard of living hence in undeveloped areas of the mainland, the workers will work much longer hours than workers in HK who will reduce working hours with the help of trade unions. ...read more.

For example, from my questionnaire, the results showed that 57% of the people had received IT re-training and 63% sensed job insecurity due to the emergence of IT. However, I must say that the people who agreed to fill in my questionnaire mostly worked in offices and were of low managerial status e.g. secretary, clerical officers etc. Therefore, if I had interviewed another category of people, then I would have probably got different results hence the outcomes from my questionnaire could be biased. Another weakness involved in my piece of coursework was the fact that I was only able to obtain occupational statistics for a period of ten years hence it may have affected the accuracy of it. If I were able to get hold of results for a period of a longer time, then I would probably be able to draw slightly different conclusions from it. However, in general I think I have done my best and so I am quite content with it regardless of the weaknesses involved. BIOGRAPHY Sources used for primary data: Questionnaire Sources used for secondary data: Hong Kong's Annual Digest of Statistics 1999 p.21 (Employed Persons by Industry) South China Morning Post Article "A path to a world without work" Dated 13/11/02 Hiu Yee CHUNG 11D ...read more.