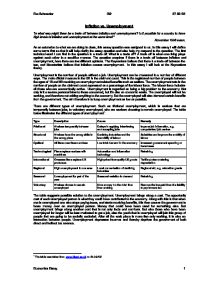 Inflation vs. Unemployment "In what way might there be a trade off between inflation and unemployment? Is it possible for a country to have high levels of inflation and unemployment at the same time?" November 1996 exam. As an extension to what we are doing in class, this essay question was assigned to us. In this essay I will define some terms first so that it will help clarify the essay question and also help my respond to the question. The first technical word I can find in the question is a trade off. What is a trade off? A trade off is when one thing plays against each other in a sacrifice manner. The question enquires if there is a trade off between inflation and unemployment, here there are tow different opinions. The Keynesians believe that there is a trade-off between the two, and Monetarists believe that inflation causes unemployment. In this essay I will look at the Keynesians theory. Unemployment is the number of people without a job. Unemployment can be measured in a number of different ways. The main official measure in the UK is the claimant count. This is the registered number of people between the ages of 18 and 60 receiving an unemployment-related benefits such as welfare. The unemployment rate is the number of people on the claimant count expressed as a percentage of the labour force. ...read more.

Unemployment depresses incomes and thereby deprives the government of both direct and indirect tax revenue. From this comes the next definition, inflation. Inflation refers to the continual increase in prices. The value of money refers to the amount of goods or services one unit of a currency can buy. Inflation expresses that the value of money is falling because the prices keep rising. To inflation there are benefits and disadvantages. The benefits can be things such as that people are earning more and this pay more taxes, this is beneficial for the government. Firms are able to increase prices and profits before they have to pay out the higher wages. But on the down side you will be receiving more money but the money you receive will be worth less. You will not be able to buy as much. Another thing will be that local goods will be more expensive and imports will be encouraged, whilst exports will be lower. Just like unemployment there are different types of inflation. They differ because of their causes. There is the cost push inflation, this occurs when a firm passed on an increase in production costs to the consumer. The inflationary effect of increased costs can be results of increased wages, and increased import price, increased indirect taxation. But the biggest cost of all is the uncertainty. This means you can't control demand. ...read more.

No government policy could work on the this level of unemployment. In fact any policy would make it worse. A certain level of unemployment is needed to keep the economy stable. The following refers to the graph on page 3. Unemployment is at NAIRU, and the rate of inflation is stable at 4% par annum. This will be the expected rate of inflation, wage settlements will be linked to this so real wage rates will be constant. Now if the government tries to reduce the level of unemployment to U1 by increasing aggregate demand. The effect will be an increase in prices and production will become more profitable because many costs will not change immediately, because wages for example are normally only adjusted annually. The graph below is the Expectations-augmented Phillips Curve:3 So to conclude in what way there may be a trade-off between inflation and unemployment it is because of the job opportunities and the wages. Unemployment is effected by inflation because of the wages, and inflation is effected because of the costs of unemployment. Then looking at the part asking if it possible for a country to have high levels of inflation and unemployment at the same time, the trade-off would say no, but it is possible if the point where the SRPC crosses the NAIRU is high enough. Word count:4:1309 Consulted Literature: * Introductory Economics Sixth edition G F Stanlake and S J grant Pages: 371-381, 418-430 * www.bized.ac.uk * Class notes 1 The table was taken from www.bized.ac.uk on 24-09-'02 2 Graph taken from www.bized.ac.uk 3 Graph taken from Introductory Economics page 427. ...read more.