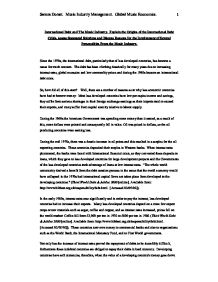 International Debt and The Music Industry. Explain the Origins of the International Debt Crisis, Assess Suggested Solutions and Discuss Reasons for the Involvement of Several Personalities From the Music Industry. Since the 1970s, the international debt, particularly that of less developed countries, has become a cause for much concern. The debt has been climbing drastically for many years due to increasing interest rates, global recession and low commodity prices and during the 1980s became an international debt crisis. So, how did all of this start? Well, there are a number of reasons as to why less economic countries have had to borrow money: Most less developed countries have low per capita income and savings, they suffer from serious shortages in their foreign exchange earnings as their imports tend to exceed their exports, and many suffer from capital scarcity relative to labour supply. During the 1960s the American Government was spending more money than it earned, as a result of this, more dollars were printed and consequently fell in value. Oil was priced in dollars, so the oil producing countries were earning less. During the mid 1970s, there was a drastic increase in oil prices and this resulted in a surplus for the oil exporting countries. ...read more.

A number of solutions have been proposed to try to relieve the international debt crisis. In the late 1970s and early 1980s, the International Monetary Fund negotiated rescheduling agreements in an attempt to decrease the burden of debt repayment on developing countries. They also endeavoured to change economic policies in order to avoid the need for future loans. Although the governments of the debtor countries accepted this proposal, the public were resistant to the economic rigidity that was required. In the early 1980s, the world was faced with recession and many less developed countries were on the verge on reneging on their debts. In 1985, the 'Programme for Sustained Growth' was agreed, aiming to reduce the burden of the International Monetary Fund's austerity policies and to relieve the pressure on social stability brought on by both the strict policies and those attempting to reduce imports. (Griffiths, A. & Wall, S. (1999). Applied Economics. Pp 726). Another suggested solution is that concessions should be required from commercial banks, governments and the international financial institutions, in particular the reduction of the accumulation of the stagnant debt of the poorest countries which are impossible to pay. It is also argued that there should be consideration for an international insolvency procedure that will allow international debts in future to be settled in a transparent and open court of arbitration at which both debtor and creditor may appoint an equal number of arbitrators. ...read more.

These people have much influence on their fans and also have access to bodies involved in international debt management. They can use this influence and access to help make a difference. The involvement in such charities may also give these personalities a greater sense of worth and make them feel that not everything is about making money for themselves. It is not a universally shared view that the third world debt should be cancelled. There are many people who believe that developing countries should pay back what they owe to the developed world, irrespective of the economic hardships that they face. It makes economic sense for people to repay their debts. "Western governments and creditors cannot be expected to write off debts owed by developing countries as this move is considered to be against the principle of economics. Such move is considered to be unfair to other countries that struggle to repay their debt." Third World Debt Crisis [online]. Available from: http://www.derby.ac.uk/seas/geog/jollyfranc/third_world_debt.htm. [Accessed 02/05/02]. Although it may be a desirable idea, cancelling Third World debts now will not solve the problem in the future. To do that, the present financial system needs to be reviewed. The current system is based on debt and interest payments, a system that keeps control in the hands of those who are rich and powerful. ...read more.