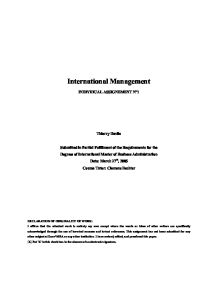 International Management INDIVIDUAL ASSIGNEMENT N�1 Thierry Davila Submitted in Partial Fulfilment of the Requirements for the Degrees of International Master of Business Administration Date: March 27th, 2005 Course Tutor: Clemens Bechter DECLARATION OF ORIGINALITY OF WORK: I affirm that the attached work is entirely my own except where the words or ideas of other writers are specifically acknowledged through the use of inverted commas and in-text references. This assignment has not been submitted for any other subject at Euro*MBA or any other institution. I have revised, edited, and proofread this paper. [X] Put 'X' in this check box in the absence of an electronic signature. 1 Do you agree that China is or will be the lowest-cost manufacturing center in the global economy? Abandoning its isolationism, China has engaged in the global marketplace, competing with the biggest economic powers. In this battle, workers low wages is giving a strong advantage in terms of cost manufacture to china but other countries such as India are competing in this field especially in the Business Process Outsourcing market1. China strengths are mainly based on: * Low human resources cost * Knowledge pool These factors linked with an internal market that is representing in some field 20-30% of the world total market is giving further advantages to china in terms of manufacturing. However since China opening to the new economy is very recent consequently the main weakness of this countries are: * Low R&D know how * Resistance to the ...read more.

The simultaneous entry of Taiwan and China into the WTO will initiate a whole new set of business opportunities and growth. Since Taiwan trade relation with its favoured partners will remain there will be little impact in the short term on its exportations. On the contrary, Taiwan will suffer and will see its internal market swamped by Mainland Chinese products. It the most visible part of the change and most consider that Taiwan will loose much as the most China manufacturing industry will increase and the more Taiwan market will see huge quantity of Chinese product coming into the island. This will lead to a loss of jobs in the affected manufacturing sectors. Many countries consider Taiwan as a gate towards China, and consequently will tend to increase their investment in the island seeking for foundation for their Chinese development. Since the companies already established in Taiwan will have better opportunities than any ones; Taiwan will in the wake of china, see and increase of its exports and investment towards the mainland, therefore becoming potential growth factors for Taiwan. Players in the financial services or high technology are only some of the many sectors with this winning potential. 4 Explain the statement that "China's WTO debut is not uniformly good news for the 1.3 billion Chinese." China entry in the WTO will have several effects on the trade of Chinese and its import - export. ...read more.