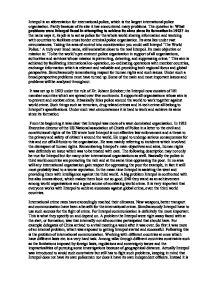 Interpol is an abbreviation for international police, which is the largest international police organisation. Partly because of its size it has encountered many problems. The question is: What problems were Interpol faced in attempting to achieve its aims since its formation in 1923? As the name says it, its job is to act as police for the whole world sharing information and working with countries to facilitate cross border criminal police organisation. Its area lies under vast circumstances. Taking the area of control into consideration you could call Interpol 'The World Police.' A truly over lined name, still somewhat close to the real Interpol. Its main objective or mission is: 'To be the world's pre-eminent police organisation in support of all organisations, authorities and services whose mission is preventing, detecting, and suppressing crime.' This aim is achieved by facilitating international co-operation, co-ordinating operations with member countries, exchange information which is relevant and valuable and providing both regional focus and global perspective. Simultaneously remembering respect for human rights and such issues. Under such a broad perspective problems must have turned up. Some of the main and most important issues and problems will be analysed throughout. It was set up in 1923 under the rule of Dr. Johann Schober; the Interpol now consists of 181 member countries which are spread over five continents. It supports all organisations whose aim is to prevent and combat crime. ...read more.

Keeping the above in mind, it is very hard to imagine how you can keep control or some sort of order if there is no real standard. Respectively this is one of the biggest problems Interpol has. Every time a different case appears Interpol has to track the culprits down according to the local laws. As soon as this person leaves the country Interpol has to adapt to totally different conditions and laws to further work on this case. Clearly Interpol had to fight many international problems. But as mentioned before many also existed within the organisation. As we all know it is hard to work on an international level if you have not sorted yourself out internally. A rather big issue which came up was that Interpol's pre war records had gone missing; which is today still unsolved. This probably held up the organisation in attempting to achieve its aims. As referred to in the introduction, Schober the actual former of the Interpol after world war one, turned out to be a very controversial personality. Apparently he was an anti communist and directly involved in an incident with 86 deaths of people after a demonstration, while he was still a Viennese police chief. In the end he also turned out to be the president of the n**i regime in world war two. ...read more.

Only by working as a whole can Interpol achieve its aims. By the help of other countries and their communication they can work to together to come to general solutions and agreements. It is vital that each country participating puts in all effort they can to make the result with other countries involved best. By working over cross boarder relations they are able to encounter tasks. As I mentioned it is very difficult for this to happen because of the different laws, still by working as a community and using communication to its maximum value the best result can be made. I consider environment to be an aspect which cannot be avoided in this piece of writing. Only through making the best of our community can we make the best of our environment. It is what we live in every day and so have to ensure the safety of our environment. Interpol is a perfect example of an international organisation which is trying to make our environment safer. I think this is very important and so is a good contribution to the world's community and well being. Reference List: Interpol. (2003). Introduction to Interpol. http://www.interpol.com/Public/Icpo/introduction.asp (May 7 2003) (1999). Interpol grows towards the next millennium. http://www.afp.gov.au/raw/publications/platypus/june99/interpol.htm (May 6 2003) Maj (Retd) Agha Humayun Amin. (2000). Interpol, some basic facts. http://www.paksearch.com/globe/2000/SEP/interpol.html (May 7 2003) Interpol. (2003). Structure of Interpol. http://www.interpol.com/Public/icpo/governance/default.asp (May 5 2003) ?? ?? ?? ?? ...read more.