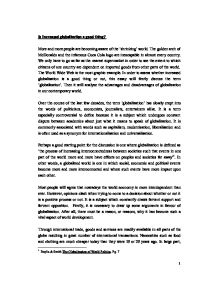 Is Increased globalization a good thing?

Is Increased globalization a good thing? More and more people are becoming aware of the 'shrinking' world. The golden arch of McDonalds and the infamous Coca Cola logo are inescapable in almost every country. We only have to go as far as the nearest supermarket in order to see the extent to which citizens of one country are dependent on imported goods from other parts of the world. The World Wide Web is the most graphic example. In order to assess whether increased globalisation is a good thing or not, this essay will firstly discuss the term 'globalisation'. Then it will analyse the advantages and disadvantages of globalisation in our contemporary world. Over the course of the last few decades, the term 'globalization' has slowly crept into the words of politicians, economists, journalists, entertainers alike. It is a term especially controversial to define because it is a subject which undergoes constant dispute between academics about just what it means to speak of globalization. It is commonly associated with words such as capitalism, modernisation, liberalisation and is often used as a synonym for internationalisation and universalisation. Perhaps a good starting point for the discussion is one where globalization is defined as 'the process of increasing interconnectedness between societies such that events in one part of the world more and more have effects on peoples and societies far away'1. ...read more.

To reject the globalisation of science and technology would be foolish. Advocates of globalisation also claim that greater integration does not lead to growing inequality within countries as some allege. There are certainly some countries in which inequality has risen, but that is not the worldwide trend. Most importantly, in the developing countries that are growing well as a result of integration and other reforms, rapid growth translates into rapid poverty reduction. Since 1980, the total number of extreme poor declined by 200 million6. As it had been discussed in the previous paragraphs, globalization clearly can bring tremendous opportunities and benefits. However, opponents of globalisation accuse it of acting as a trap for nations. Critics charge globalisation for the industries that have shut down and the jobs that have been lost to global competition. Globalisation brings a flood of cheap imports into developed countries, thus reducing the relative wages of unskilled workers who are suddenly forced to compete with inexpensive labour in the developing world. Moreover, the emergence of a 'risk culture' is a great worry. The major problems that face many countries today are global risks such as pollution. Globalisation also manifests itself in the contemporary spread of AIDS in Africa and Asia. These are problems that states cannot solely control by themselves. Globalisation also makes it easier for drug cartels and terrorists to operate. ...read more.

However, globalization definitely is not a panacea. It does not hold the answer to universal equality, prosperity, peace and freedom as some had presumed. Poverty is still rampant in the contemporary globalizing world. Human-induced ecological degradation has never been worse. Numerous major armed conflicts were underway and globalization has not provided a formula for increased democracy either. Yet, it lowers costs, broadens choices, delivers more capital and opens more markets, giving the individual more power to control his or her destiny. As the Asian economies demonstrate, globalization can build economies through trade and investment and spur development in even the world's poorest nations, but it can also bring economies down overnight. Namely, used properly it can be used to massively reduce poverty worldwide and to reduce global inequality. In this light, it seems that globalization itself is neither good nor bad. However, used properly it can bring about many benefits; used hastily it can seriously damage an economy. It must be seen as something to mold, shape and manage. The reality is that globalization is here to stay whether we like it or not. With 1.2 billion people still living below the poverty line, the foremost challenge is to encourage greater global cooperation in order to provide g collaboration and coalitions to handle the risks emerging from this connected world. There is a need to balance local forces with international forces. A country must carefully choose a combination of policies that best enables it to take the opportunity - while avoiding the pitfalls. ...read more.

*****
This is an exceptional piece of work that systematically goes through the arguments for and against globalisation. The writer is even handed in their points. Inevitably, putting an argument for means they have to contradict themselves later to some extent but that is handled well and objectively. The conclusion is also excellent.