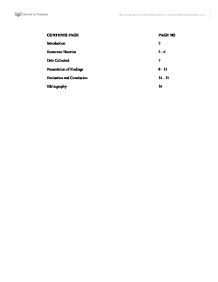 Is the Government to Blame for Higher Petrol Prices?

CONTENTS PAGE PAGE NO Introduction 2 Economic Theories 3 - 6 Data Collected 7 Presentation of Findings 8 - 13 Evaluation and Conclusion 14 - 15 Bibliography 16 INTRODUCTION In September 2005 the UK experienced unprecedentedly high petrol prices at filling stations throughout the country. In rural Wales the psychologically important �1/litre was breached for the very first time. What I wish to investigate is what is causing prices to be so high at the pumps at this particular time and why petrol prices are rising faster than the rate of inflation. In 2000 there were widespread protests to the level of government taxation placed upon petrol as it was felt to be excessive and unfair, similar smaller protests occurred this year also. Government Taxation is a major determinant on the price of petrol however there are other factors which determine the price of petrol. The price of petrol is made up of 4 components. The Fuel Duty imposed upon it, the Value Added Tax imposed upon it, the amount the product cost and the retailer/deliverer's overheads. As we all know the two taxes are determined by the government, the product's price is determined by the price of oil and the retailer's/deliverer's overheads by the costs of production associated with selling the oil. I will therefore need to investigate the rate of taxation used by the government on petrol and what determines the price of Crude Oil being the main component of Petrol. Crude Oil is a derived Demand as it is useless as it is it is made into useful products like petrol. I will investigate the Retailer/Deliverer overheads differences between different suppliers and different companies will charge different prices for petrol. My investigation to cover both the short and longer term history of petrol prices and I will try to used historical data and economic theories to try and establish why Petrol Prices are rising on a general long term trend. ...read more.

Oil Prices however rose over this period from $18.97/Barrel to $48.97/Barrel a 61.93% rise over this period. Clearly it can be seen that supply from OPEC has risen much slower than the increase in the oil price over this period making Oil Supply Price Inelastic. Also these graphs show OPEC production being cut when prices were low to stabilise the oil price and stop it from declining. Determinants for Supply of Oil (Short Run) Supply disrupted by Hurricane Katrina Hurricane Katrina was the major short term cause of supply led increases in petrol prices having interrupted oil production, importing, and refining in the Gulf area, thus having a major effect on petrol prices. A tenth of all the crude oil consumed in the United States and almost half of the gasoline produced in the country comes from refineries in the states along the Gulf's shores. At least twenty offshore oil platforms went missing, sank, or went adrift, according to the Coast Guard. One oil rig, in dock for repairs before the storm, broke loose and hit the Cochrane/Africatown USA road bridge over the Mobile River in Mobile, Alabama. Two others went adrift in the Gulf of Mexico, but they were recovered. One platform, originally located 12 miles (20 km) off the Louisiana coast, has washed up onshore at Dauphin Island, Alabama. The Shell Oil Company MARS platform, producing around 147,000 barrels (23,000 m�) a day, was severely damaged. The Louisiana Offshore Oil Port, which imported 11% of US oil consumption, closed on August 27, and Shell reported a reduction in production of 420,000 barrels per day. Due to fears that the production of oil in the United States would be cut by up to one-third of normal capacity, the price of oil fluctuated greatly throughout August 28th reaching highs of $70/Barrel. Long lines developed at some petrol stations throughout the U.S. as customers rushed to buy Petroleum, anticipating price increases in the wake of the storm. ...read more.

Using statistical data I was able to prove that Oil Supply is very Price Inelastic with a PES of 0.19. The data also showed to me that Oil Demand is not only Price Inelastic it actually is positively inelastic so it slopes the way a supply curve does. This shows just how reliant the world really is upon Oil that demand increases even when price is increasing. Soon however I feel that alternatives to Oil will become economically viable and Oil Demand would become increasingly price elastic as Solar Powered/Hydrogen Powered Cars become the main source of transportation. Hydrogen is already being tested on some London Buses. To improve my investigation I would have hoped to have researched local filling stations to gain primary research however the filling stations were unable to supply me with the price information I needed because these details were not kept within the shops themselves. I would also have liked to have done a more in depth analysis upon OPEC and its internal workings to discover just how true a monopoly market structure it actually operates. I have tried to show how it does exert monopoly power upon the market i.e. 1973 Oil Crisis however I am not sure whether the price setting is more to do with political motivation rather than profit maximising. I would have also like to have been able to do more research into the new alternatives to Petrol cars being developed. So is The Government to blame for Rising Petrol Prices? The answer before 2000 with the fuel accelerator in place and 80% of petrol cost being taken up would have been a resounding Yes. However as my investigation has shown more worryingly in fact Petrol Price increases are now out of Government hands as Demand led rises in prices are likely to continue. The era of cheap petrol appears to be coming to and end and with our North Sea Oil stocks dwindling it is likely our petrol prices are about to become much more expensive and much more volatile. ...read more.