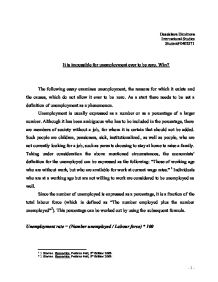 It is impossible for unemployment ever to be zero

Dessislava Dimitrova International Studies Student# 0402371 It is impossible for unemployment ever to be zero. Why? The following essay examines unemployment, the reasons for which it exists and the causes, which do not allow it ever to be zero. As a start there needs to be set a definition of unemployment as a phenomenon. Unemployment is usually expressed as a number or as a percentage of a larger number. Although it has been ambiguous who has to be included in the percentage, there are members of society without a job, for whom it is certain that should not be added. Such people are children, pensioners, sick, institutionalized, as well as people, who are not currently looking for a job, such as parents choosing to stay at home to raise a family. Taking under consideration the above mentioned circumstances, the economists' definition for the unemployed can be expressed as the following: "Those of working age who are without work, but who are available for work at current wage rates."1 Individuals who are at a working age but are not willing to work are considered to be unemployed as well. Since the number of unemployed is expressed as a percentage, it is a fraction of the total labour force (which is defined as "The number employed plus the number unemployed"2). This percentage can be worked out by using the subsequent formula. ...read more.

That means that not every job seeker will be employed for some would wait for a better job opportunity. The following diagram illustrates the concept of equilibrium unemployment. The curve N represents the total labour force. The distance between the N and the aggregate supply curve AS stands for the difference between people looking for work and those, who actually are willing to accept jobs at a current wage rate. Q1 is the equilibrium level of employment and the line ED is the equilibrium level of unemployment. The reason why curve N gets closer to the curve AS at higher wages is because a greater number of unemployed will be willing to accept jobs if they are offered higher wages. The equilibrium unemployment is the main incentive why the rate of unemployment cannot be equal to zero. Moreover, if considered that there is no disequilibrium of unemployment at a specific wage level in the economy, although there are as many job opportunities as there are job seekers, there will still be a number of people unemployed just as there will still be a number of job vacancies unfilled. There could be drawn other motives for that. First, there might be an excess demand for labor in form of job vacancies in a market and an excess supply of labor in others. The jobseekers will not be suitable to take up jobs available in the other market simply because they are not suitable (trained properly) ...read more.

It can also be due to the pressure of competition with other industries. Another is a change in the methods of production. Examples are the rapid development of new technologies and techniques, which allow the production of the same output with fewer workforces involved. That process is called "labor-saving technical progress" and it is widely favored and used for its cost-saving advantages. Unless the output of production increases so that it involves the spare labor force, redundancy of unused workforce is going to be the natural consequence of the technical progress. That would generate what is referred to as the technological unemployment. One more factor, which would keep the minimum rate of unemployment possible above zero, is seasonal unemployment. Seasonal unemployment occurs when the demand for labor fluctuates with the changing time of the year. That is the case in tourist regions and resorts where the demand for workforce is particularly high during the rush seasons of the year. At that time unemployment significantly increases. To conclude, as seen above many of the causes of unemployment mostly involve factors, which are natural (such as time of the year and human character) and cannot be eliminated. Another proof of the fact that it is impossible to fight nature is that types of unemployment, such as equilibrium unemployment, will always persist in this world. Therefore it is called "the natural unemployment", which indicates that it is natural and unavoidable to have a certain level of unemployment in the economy. Thus it is impossible for unemployment ever to be zero. ...read more.